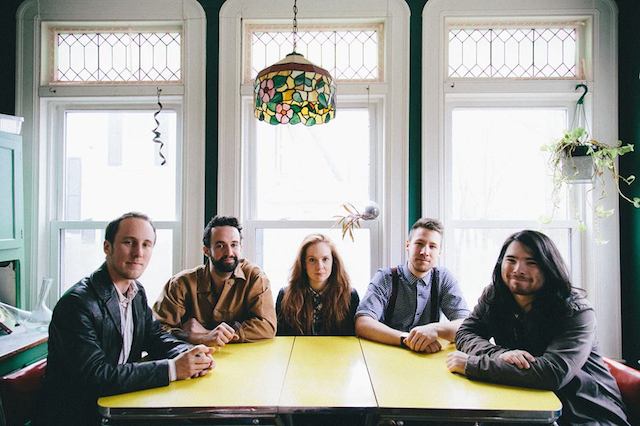 Nashville has been hit with a sudden heat wave that is apt to make any sane person a little crabby. The Basement is offering an excellent oasis to escape the temperatures with it’s cool location because luckily it is, in fact, a basement. Tonight the show is featuring The Novel Ideas, a Massachusetts-based band that is no doubt a little out of their element weather wise. Musically, however, their record label, Young Giant, put them in a city that couldn’t be more welcoming of the quintet. Continue reading to learn more about The Novel Ideas and some of the other bands on this great FREE bill.

The band hails from Boston, Massachusetts and they are currently on tour (and have been for the past year) to promote their debut album Home (which you can download for free right here) and their recent single “Montana”. For two years, the group has been working hard to bring their music to various parts of the United States, and Nashville is their next stop. The Novel Ideas have, in their short lifespan as a band, already played with Augustines, Little Green Cars and Lord Huron, to name a few, which just goes to show how ambitious the five members are in achieving their goal of being a successful country/folk group. At this point you should be thinking, “Wait, this awesome new band is giving me a free download of their album and a free show? Hell yeah, I’ll go.” Check out the video for “Old Ways” below before seeing them in action tonight at The Basement.

Buffalo and Clyde Faust (seriously, not sure those names could be any cooler) are a Nashville-based rock duo that describes themselves as a “north by south rock band.” These guys have raspy, gritty vocals that mix with upbeat rock and somewhat folky melodies to give Nashville a new twist on what a southern group sounds like.

Eddie Dixon may be new to Nashville, but he certainly isn’t new to the music scene. This experimental rocker already has three albums under his belt, including Well…That’s Just Perfect (2009), skirmisher (2011) and Stow and Brace (2013). In addition to his own music, Eddie Dixon has worked and played with many artists as an instrumentalist and singer, including Serengeti, The Blacks, and Jen Hall. All his hard work is enough to make us feel like a lazy sack of bricks by comparison.

Born and raised in Nashville, singer/songwriter Grace Albritton refuses to define what genre of music she plays and in fact leaves it up to the listener to decide. What we can tell you about her music without determining a genre is that she is influenced by the great singers of soul, blues and folk: Ella Fitzgerald, Bob Dylan, Simon & Garfunkel, etc. Take a listen and you decide what genre she is, then swing on by the show to give her your opinion.

The Novel Ideas, Faust N’ The Family Bargain, Eddie Dixon and Grace Albritton will perform tonight May 6th as part of New Faces Nite at The Basement. The show is 21+, begins at 8PM, and it is free entry.