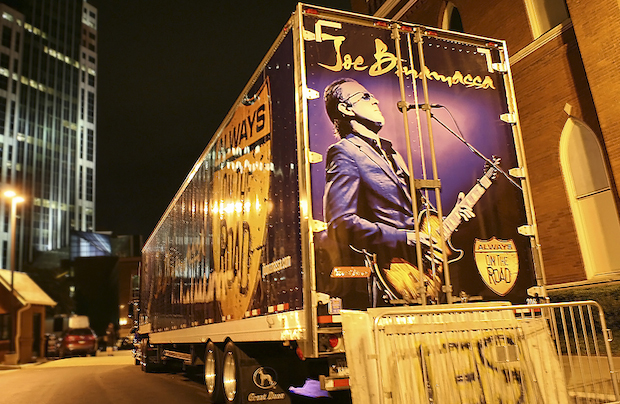 Readers, we got to witness something amazing last Saturday: the one and only blues legend Joe Bonamassa at the legendary Ryman Auditorium. As you might imagine, this was quite the performance, and we had an absolute blast getting to see this guitar phenom do his thing up on stage. Because there was no opener, Bonamassa actually played two sets, one acoustic and one electric. We were lucky enough to have photographer Michael Brooks come along and capture both of these sets. We’ve got the photos and a more in-depth review after the jump, so keep on reading!

Even before stepping foot into The Ryman, the atmosphere of the evening was already bubbling downtown. Being one of the first warm weekends of the year, downtown was bustling, and the historic Ryman Alley was about as crowded as we’ve ever seen it. After meandering through the drunken, happy masses, we eventually made it into the historic Ryman Auditorium itself. If you’ve never been to the Ryman, it’s the sort of venue that demands its patrons show respect, and it was evident from the moment one walked in the door that the entire crowd held Joe Bonamassa in the highest esteem. Finally, the moment came, and the man himself walked on to the stage, sporting his classic sunglasses and tie getup.

While most fans are more familiar with Bonamassa’s electric work, the man seemed to have no problem shredding through his acoustic set. Bonamassa was backed by four multi-instrumentalists, most of whom cycled through a number of different traditional and modern acoustic instruments throughout the set. Bonamassa himself played a number of different acoustic guitars throughout the set; in fact, just about every song had its own guitar.

Having played on stage since he was 12 years old, Bonamassa is totally comfortable and cool in concert. Between smiling and joking with the crowd and telling personal stories, the performer did a fantastic job of including the audience in the production. Furthermore, he expressed his respect for the Ryman, even citing it as “one of five venues in the world I’ve always wanted to play.” Apparently, Joe even called his mother before the show to express how excited he was to play this historic venue. Moves like this help to elevate Bonamassa from simply a gifted musician to a true performer; his ease on stage helped set the perfect vibe for the evening.

In terms of the actual musical content of the acoustic set, Bonamassa and his band was as tight as always. There were the flurrying scales and 500 notes per minute solos that one might expect, but the really impressive point of his playing was the way he incorporated horizontal motion into the structure of his songs. Each and every note led to the next note, crafting a vivid storyline that kept the audience engaged through the entire song. This mastery over rhythm and the horizontal structure of a song isn’t something one comes across too often, and in many ways it’s a mark of a true master.

The acoustic set featured a number of popular tunes, including “Dislocated Boy,” “Athens to Athens,” and “Black Lung Heartache,” but it soon came to a close. After a fifteen minute set break, Joe Bonamassa and the rest of his band came back out for the electric set. While the acoustic set was nothing short of spectacular, the electric set is where Joe Bonamassa really made a name for himself. Once again, there was a number of guitars, including an extremely rare signature Epiphone solid body. As he is wont to do, Joe absolutely shredded his solos, further solidifying his status as a blues titan.

The electric set also featured a number of popular Bonamassa tracks, including “The Ballad of John Henry,” “Blues Deluxe,” “Django,” and “Mountain Time.” Throughout the entire set, the crowd stayed engaged, likely due to that mastery over horizontal motion we discussed before. Being an electric set, the second half of the show was quite a bit more energetic than the first set and featured a more intricate light show. Whereas the first set was rather intimate, the second set felt a lot more like a traditional show. Not that we’re complaining, however: he absolutely killed the electric set and very well might be the best soloist we’ve heard in years. It was a great honor to be able to see this man play, and, if he’s ever in the area again, we highly recommend you come out to the show. It’ll change your conception of what can be done with a guitar, we guarantee it.