Here at No Country, we aren’t like Pitchfork or Stereogum in that we aren’t a national or international publication. It’s right there in the name: No Country for New Nashville. We’re proud of our roots here in Music City, and really make an effort to try to focus on our the music scene, rather than spreading ourselves thin trying to cover everything beyond.

That being said, when our friends over at Team Clermont asked us to help them out with the Shaky Knees Music Festival happening in Atlanta, Georgia from May 9-11, we decided this was worthy of some expanded coverage. After all, have you guys seen that lineup? It’s absolutely killer. The headlining acts for the festival are The National, The Alabama Shakes, and the ever illusive Modest Mouse. That’s already a pretty solid lineup, and those are just the headliners. You can also catch some of our favorite acts like Spoon, Portugal the Man, Tokyo Police Club, one of our recent Bonnaroo Band of the Day’s White Denim and dozens more indie rock favorites. If this at all sounds appealing to you, you can pick up both one day or full weekend passes through Shaky Knees’ website. Please remember that if you went to this event last year, at Fort Ward Park, the actual festival grounds has changed locations to Atlantic Station.

Another reason this festival appeals to us is that a number of Nashville based acts will be making an appearance. Readers are no doubt familiar with Nashville-by-Mississippi long-haired rock troubadours The Weeks, as well as acts like the Kopecky Family Band and Fly Golden Eagle. We’ll actually have a number of posts rolling out throughout the week that will highlight our personal favorite acts on each individual day; we’ll also keep you up to date on the Nashville acts making an appearance at Shaky Knees. In the meantime you can check out the lineup for yourself and take a listen to one of our favorite Nashville acts that’ll be at Shaky Knees, Apache Relay. 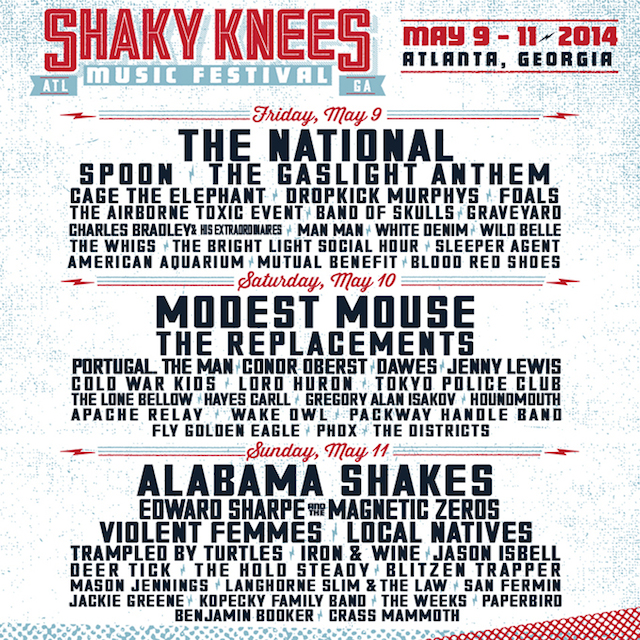