Bonnaroo Band of the Day: A Tribe Called Red 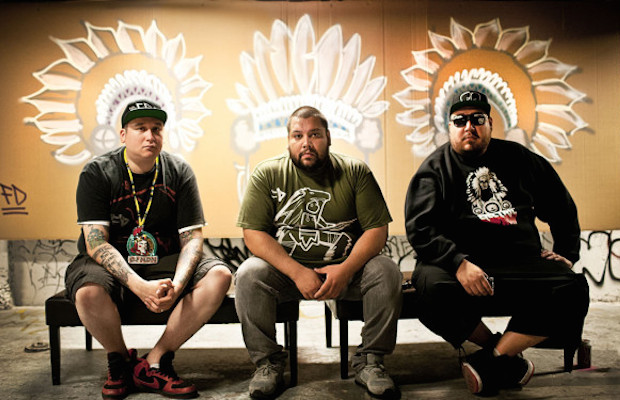 Guys, we’re really excited about today’s Bonnaroo Band of the Day. Why’s that? Well, because it’s A Tribe Called Red, of course. If you’re familiar with this trio’s work, you probably just sat up in your seat in excitement, because there’s something about this Canadian electronic act that breeds very devoted fans. If you’re not yet familiar with A Tribe Called Red, well, let’s start here: this unique group take elements of traditional tribal and aboriginal music, often from Native American cultures, and weave it into a club dance style sound. Now, you might have heard trance tracks that pull from traditional Indian melodies before, but A Tribe Called Red is an entirely different beast. They successfully pull together that alluring power in a great electronic drop with the spirituality and communal feeling of a Native American chant. The result is quite intoxicating, and it’s hardly surprising this trio have won a number of awards and garnered nominations commemorating their creativity and willingness to delve into a barely explored niche.

A Tribe Called Red, which consists of DJs NDN, Shub, and Bear Witness, has been together since 2010, and, over the course of the last four years, they’ve put out two albums, an EP, and a number of mixes. The band describe the releases and their sound as a whole as “powwow-step”, which, honestly, is probably the most fitting description we’ve heard. You can get their debut self-titled album through their website for free (there’s a link at the bottom of the page), but, if you’re the type who likes try before you buy, we’ve got their breakout single “Electric Pow Wow Drum,” as well as the video for “Sisters” featuring Northern Voice, below.