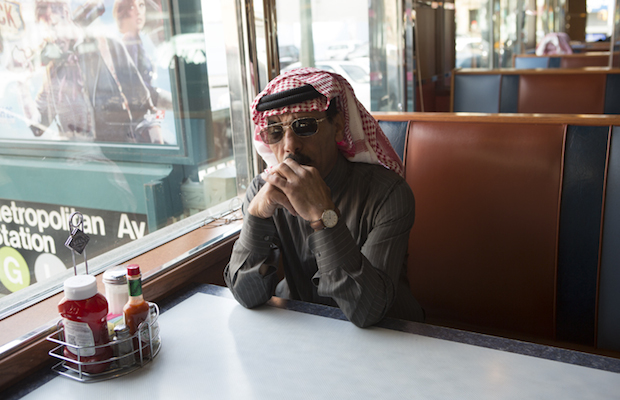 Now making his home in Turkey instead of his severally war torn and indigenous Syria, Omar Souleyman is the grand master of all Middle Eastern wedding singers. When it comes to MC’ing a reception, he has officially achieved legend status.  He got his start in 1994, performing at nuptials with various groups of musicians who he still performs with to this day. Over the years, Souleyman has released literally hundreds of live and studio albums, usually recorded only once and given to the bride and groom as a gift on their special day. Most of these recordings have been copied and later distributed throughout the Middle East and now the internet, giving Omar a near mythical status as an artist who functioned nearly label-less, and outside of the mainstream recording industry. After a couple recent studio backed compilations and live recordings, as well as a string of festival appearances across the globe to boost his artistic presence, the the dabke pioneer has finally released Wenu Wenu, his first completely new and widely distributed studio record through Ribbon Music and Domino.

Singing mostly in Arabic or Kurdish, Souleyman takes his inspiration from Syrian folk music, dance music, and instruments like the bozouki (a long necked type of lute) and the rebab (single stringed fiddle). He invented what people of the region call the Shaabi street sound, and fans at his shows are often seen doing the dabke, a foot-stomping circular dance popular with middle-easterners. Although Omar now says wedding gigs are a thing of the past, he has only grown in popularity throughout his native region, and seems to be picking up fans in the Western hemisphere more rapidly than ever thanks to a recently released remix of Björk’s Biophilia. His late night festival performances have become folklore to hardcore ravers,  including one of his first-ever shows in the United States, at Bonnaroo 2011m when he kept the party going till almost dawn. Still not sold? Check out Souleyman’s stuff below, and just imagine dancing your face off with a couple thousand friends at 3 a.m. this June.