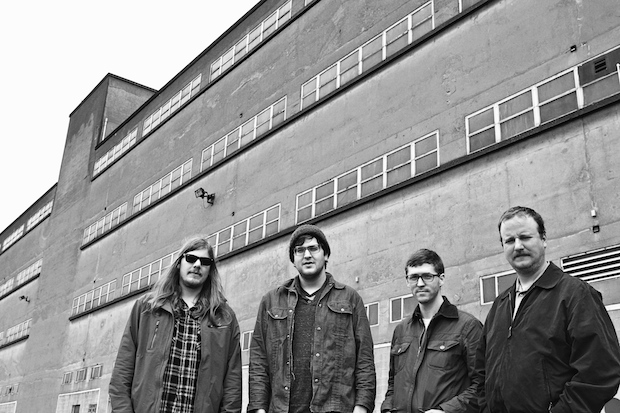 Detroit-based punksters Protomartyr certainly have been making a name for themselves lately, but it isn’t for sacrificing themselves in the name of a cause.  They’re newest record Under Color Of Official Right has been blowing up the blogosphere for the past few weeks in anticipation of it’s official release on April 8th.  Tonight, they grace Nashville with a performance at the intimate confines of The Stone Fox.  Things get started with North Carolina punksters Whatever Brains & local shredders Cheap Time.  Things get started around 9pm, and you can still grab tickets for a mere $7.  Read on if you need more info on your evening plans.

Detroit based Protomartyr formed in 2008, and first gained some notoriety with their debut release on (awesomely named) Urinal Cake Records titled No Passion All Technique.  They have since signed to Hardly Art Records for their sophomore release titled Under Color Of Official Right.  We’ve been checking out the smatterings of singles that released in the lead up to the album, and immediately found the loud, fuzzy, rippers are exactly what the doctor ordered.  Have a listen to the first single “Scum, Rise” below to get a little taste in your mouth.

Local glam punk outfit Cheap Time has had a bit of a revolving cast since forming in 2006, but frontman Jeffrey Novak has helmed the ship through thick and thin.  These old Nashville faves have been out touring this winter in support of their ambitious late 2013 release Exit Smiles.  It’s been a minute since we’ve hung with Cheap Time, so take a listen to the title track below, and get out to support your local scene.

Raleigh, North Carolina based Whatever Brains bring an interesting look at garage-y punk rock.  At times, tracks on the their self titled 2013 release seem almost like an 80’s coke party (“NPTO), the last acid trip you ever did (“Eat Forever”), or that time you were hammered at Santa’s (“Bellied Up”).  They self-describe their music as hardcore, but that is surely just their aptitude to party.  Not that there is anything wrong with that, and, in fact, that is probably how you should start your humpday anyway.

Protomartyr, Cheap Time, and Whatever Brains will perform tonight (4/26) at The Stone Fox. The show is 18+, begins at 9pm, and tickets are available for $7.