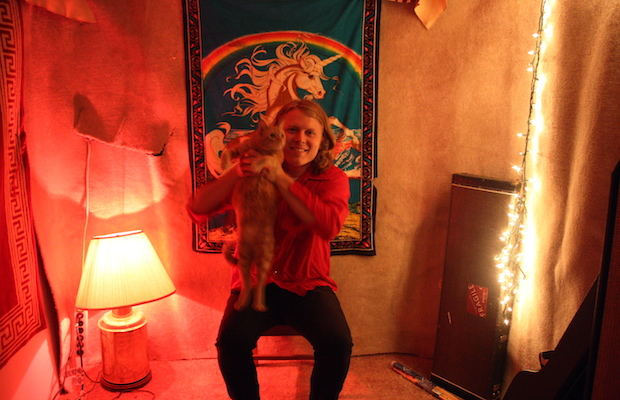 Between solo albums, splits, compilations, EPs, and 7-inch singles, San Francisco’s Ty Segall has released a staggering 35+ records in just six short years as a solo artist, a number even his most prolific of peers would be hard-pressed to match. Don’t plan to write Ty off as a quantity over quality guy, however; the rocker has amassed such a varied and sincere output not to show off and not as a gimmick, but as a sincere extension of his many, many musical facets and genre-bending ideas. A singer and multi-instrumentalist, Ty came out of the San Francisco scene, and played in several bands before making a solo career his primary focus. Never one to slow down, he still tours relentlessly between albums and still counts himself a member of groups Fuzz, Sic Alps, The Perverts, Epsilons, The Traditional Fools, Party Fowls, and an extension of his solo career, the Ty Segall Band.

Part of Segall’s vast catalog seems to have been born out of a necessity to compartmentalize. Dabbling in the realms of garage rock, heavy metal, psychedelia, lo-fi, indie, and noise rock, each album sounds markedly different, both in musical aesthetics and production, and provides a different snapshot of a wholly unique tone and theme. A master of many different stylings, Ty has quickly gained an endless amount of cred for fantastic releases like Slaughterhouse, Sleeper, and Twins, even managing to land multiple albums on multiple “best of” lists in the same year. He channels a calm, nostalgic, experimental side just as easily as an aggressive and harsh one, and his live show, something of a harmonious balance between his many records, tends to veer more into the territory of punk; an intense, explosive, unpredictable style of performance and delivery that has helped the singer pack clubs, dives, and basements from coast to coast. Bonnaroo fans have been begging for his inclusion on the bill year after year, and, with as many ties as Ty has with Nashville, we knew it was bound to happen sooner or later. If you want to experience one of the best acts this year’s fest has to offer, look no further.