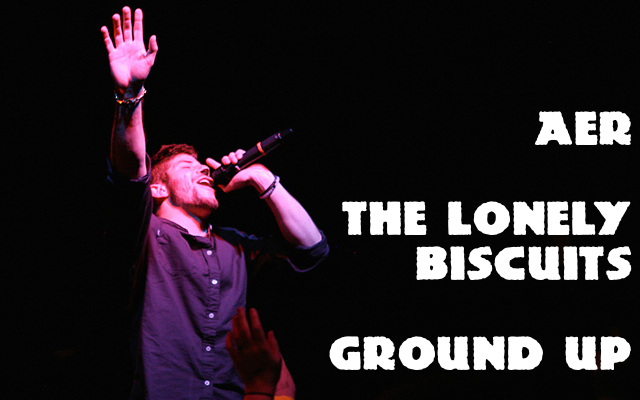 Well Nashville, we promised you this one would be a great show, and it looks like we were right. Last night, Boston based rap duo (with an extra DJ) Aer took the stage with local rock/rap group The Lonely Biscuits and Philadelphia-based rap group Ground UP for one heck of a show. There was a lot to take in, but we think we got most of it. At the very least, our photographer Michael Brooks was able to snap a number of fantastic pictures, which we’d love to share with you readers after the jump.

The evening began with Ground UP, a three person crew consisting of two MCs, Azar and Malakai, and a DJ, Bij Lincs. From the second the trio came on stage, a sense of familiarity and ease seeped through the audience. Something about these guys seemed to emanate comfort with being on stage, which served to make the band very approachable and likable to audience members. Because of this, Ground UP fostered a close relationship with the crowd, an admirable feat that can sometimes be very difficult to do here in Music City. However, Ground UP more than rose to the challenge, and were rewarded with the smiles and shaking bodies of everyone in the venue.

In terms of actual rap style, Ground UP seem to take a lot from the earlier Jay-Z releases. A number of their songs, such as “Got Damn”, feature the lazy key flicks that made Hova famous back in the day. Ground UP present a more modern, updated version of these tunes, but also aren’t hesitant to dive into harsher, party-bordering-on-trap styles, as evident in songs like “Breakfast.” The trio seems equally comfortable delving into any side of the rap game, and the crowd was more than happy to be taken along for the ride. It would be safe to say that these guys started things off correctly last night.

After Ground UP was everyone’s favorite Nashville based rock/rap group, The Lonely Biscuits. This four-piece play an interesting juxtaposition between funky, soulful vocal hooks and South Beach style raps. In all honesty, their music just doesn’t really sound like something that should be coming out of Nashville, but, instead, some surf town on the West Coast. Of course, we’re more than happy to see a little bit of that beach-y vibe injected into the scene here in Nashville, and, based on the overwhelmingly positive crowd response these guys received, it’s safe to say we aren’t the only ones who’ve been digging their sounds.

As far as actual songs go, the Biscuits played most of their crowd favorites like “Chasin’ Echoes,” and even launched into a pretty spectacular cover of “Juicy” by Biggie Smalls. This Biggie cover was probably the highlight of The Lonely Biscuits’ performance; the crowd was already jamming quite hard to an original verse by Gravy, but as soon as he called out the opening lines (“It was all a dream…”), everything absolutely erupted. It would have been tough to find someone who didn’t have a hand up in the air, bouncing along with the beat, entirely captivated.

The headliners for the evening were Boston based duo Aer, who paired with DJ Smiles to create their own blend of sunny day rap. First, however, we’ve got something to say about DJ Smiles: that guy is dope. He scratches and mixes like an old school DJ, and it’s quite a treat to get to see this man perform. He really serves as a great example for how a DJ can amp up an audience without being cheesy, or by just hitting the play button in their iTunes. A lot of times, the DJ can get overlooked when he/she is part of a rap troupe, and we wanted to make sure that DJ Smiles did not receive that same treatment. Without him there to set the stage, we doubt Aer would have been able to perform as smoothly as they did.

Speaking of Aer’s smooth performance, we quite enjoyed getting to see this duo perform live. The pair literally bounced around stage, and the high-energy level made it easy for them to connect with the crowd. Aer also tended to lead the audience in small dances, which, again fosters a great crowd relationship. In fact, if there was anything that marked Aer’s performance as spectacular, it would be this deep relationship between the group and their audience. Don’t believe us? Well, at one point in the show, the music stopped, and Carter Schultz (one of the two rappers in Aer) brought the noise levels down. Then, he asked a girl to prom for somebody in the audience. It wasn’t until after the band received word that the girl had said yes that they proceeded on with the music. This might not be the first time that someone has been asked to prom by a performer, but the sheer level of familiarity these guys had with the crowd was something else. If you get the chance, we wholeheartedly recommend that you check out Aer (or any of these acts, really). Don’t be too surprised if you enjoy yourself.