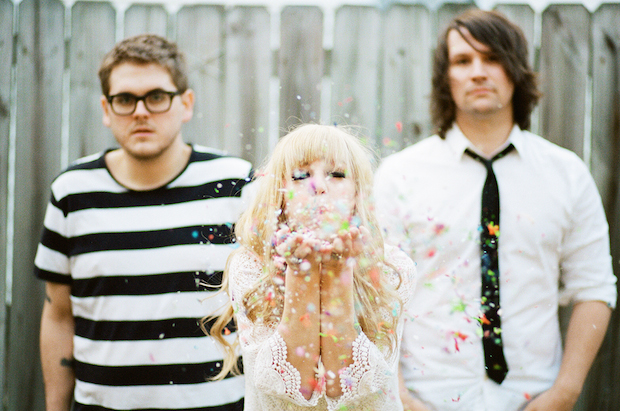 How many of you have ever ventured out to the little tents in the heat of an early Bonnaroo afternoon to see local Nashville acts?  It’s pretty awesome, right?  For those of you that haven’t experienced that kind of awesome, you can get a taste of it with a spectacular bill of up and coming local acts supporting the release of *repeat repeat‘s debut album Bad Latitude.  Of course, the show will feature the aforementioned popsters, but you’ll also get to hang with three of other favorite locals (two of which will be performing at said sweaty Bonnaroo tents this summer) – Blank Range, ELEL, and Churchyard.

This bit of awesome is happening at Mercy Lounge on April 12th, and, we’re equally excited to let you guys know that two lucky concert goers will win a ticket to Bonnaroo!  All you have to do to enter is buy an advance ticket to the Saturday show for $8 right here.  If you aren’t into pre-sales or chances to win awesome prizes, or just like to spend more money, you can drop $10 at the door on Saturday as well.

It’s hard to believe that it has been almost a year since *repeat repeat burst onto the scene with their debut Nashville show opening for none other than Dick Dale.  It’s been a year of shows, first tours, a Road To Bonnaroo appearance, and now their debut full length, Bad Latitude.  We’ve been telling you to get out to see these guys for a year now too, and, if you haven’t yet, this is a great chance for what is sure to be an amazing night.  Play around with the new record below, and grab your own copy right here.

This year’s first Road To Bonnaroo winners, Blank Range, might have taken a slightly unorthodox (or intelligent) approach by enlisting the likes of guitarists from Apache Relay and Diarrhea Planet to melt the faces of the thinned out late night crowd, but Blank Range is definitely not a flash-in-the-pan gimmick.  The midwestern transplants are certainly a band on the rise in Nashville.  Their 2013 EP Phase II was a sonic spectrum of capabilities that caught the ears of many around town.  The most notable ear might have been Lightning 100, who proclaimed “Last Crash Landing” one of the best local songs of 2013.  This increased notoriety is certainly noted in the recent uptick in local shows, and we’re certain they will do Nashville proud on the farm this summer.  You’ll have to hang tight for new music, but you can enjoy what got it started below.

In a vein similar to headliners *repeat repeat, Ben Elkins (formerly of Heypenny) created a new project that burst onto the scene around a year ago.  Since then ELEL has almost finished an album (it’s incredible), gigged incessantly around town, completed their first tour, oh yeah… they also won Road To Bonnaroo!  The mixture of upbeat lyrics with worldly rhythmic explosion of pop sound makes the it hard not to join in, and fans who have seen ELEL’s live performance have largely taken that plunge as the band’s performance is tighter than a … (insert appropriate or inappropriate metaphor here).  Spend a little time with the first single (“Kiss Kiss”) off of the upcoming record Geode to get you in the mood.

The youngest in band years will be getting things started. Churchyard first pinged the No Country radar by surprise in a back yard gathering at East Nashville record haunt Fond Object last July, but since then they’ve certainly become accustomed to more proper evening venue affairs. With the release of their demos in November 2013, they are fast approaching the femme fronted Nashville garage rock throne that Bully seems ready to blast out of, and this is your chance to see them before they get there.

*repeat repeat, Blank Range, ELEL and Churchyard will perform April 12th at Mercy Lounge. The show is 18+, begins at 9pm (doors at 8pm), and tickets are available to purchase for $8 in advance or $10 at the door.  Remember, two lucky pre-sale ticket holders will win a weekend pass to Bonnaroo!