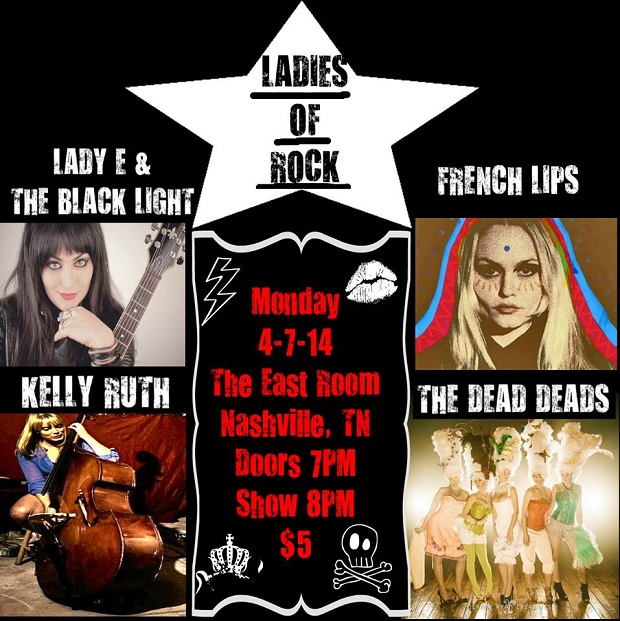 Being a great female artist means sharing experiences in a way that audiences can personalize. As opposed to being a star with an appearance and convictions as plastic as a child’s doll, many independent female artists bear their souls on stage to create an authentic connection. In Nashville’s great cultural awakening, people are rejecting the marketing schemes and gender stereotypes of “stardom”; instead demanding original music from talented women. It is because of this movement that these artists are facing a bull market.

A question then: If we’ve got great talent and a hunger for local music, where is the platform for those changing the scene? Bringing her own source of light to the stage, Lady E and the Black Light’s Erica Dilanjian would like to show you what these ladies are really made of. Dilanjian’s Ladies of Rock event at The East Room is working to bring masculine and feminine elements together with a night of powerhouse performances. It’s a raw showcase that rejects sexualized economic filters by supplying fresh players to the music game. It’s an impressive move that focuses on the whole audience instead of catering to a niche.

Her April 7th showcase features Kelly Ruth, French Lips, The Dead Deads, and of course Lady E & The Black Light. So, set a reminder to head over to The East Room around 8pm to check it all out for a mere $5. You can find out more about all the acts below.

Lady E and The Black Light paint a chiaroscuro audioscape of the marshes of the Mississippi delta and emotional wastelands of Detroit garage rock. Their kick-ass riffs with a punk-psychedelic attitude put out a heavy, dark, fun vibe that doesn’t mind venturing into the bitter crossroads of past dealings with the devil.

Kelly Ruth can serenade you with a little bit of every genre of music, and the indie-pop label doesn’t really fool anybody. She’s got Christmas cover-tunes with a great fifties feel one minute, an appropriately named “Ms. West” track that makes her sound like a balladeer of the Old West the next, and then the soft-jazz feel of “Wild Things”. Ruth’s diversity is a series of sounds that make her un-pinnable to one particular flavor, as she’s re-inventing herself with each song.

If ever there was a band that could make you feel comfortable while making you feel uncomfortable, it’s French Lips. The distressing signal of “Baby Blue” makes you feel like you’re trapped in an angry thunder storm. “This House” has something of a John Carpenter horror movie vibe over alien vocals and classic rock guitar riffs that make for a weird, ambient groove. Smokes Acquaro, Sophie Kadow, Ben Jones, and Ben Cureton – My hat is off to you for this terrific, desperate soundtrack you’ve given me.

Nashville’s all girl alternative rock daughters The Dead Deads are a flock of strange birds. “The Glow” pulls a page from metal with its vocals at times, while other tracks have a bit of The Distillers vocals going on. Nooga.com says that the band ” manages to be loud, infectious and a tad creepy at the same time.”

Ladies of Rock featuring Lady E & The Black Light, Kelly Ruth, French Lips and The Dead Deads perform tonight (4/7) at The East Room. The show is 18+, begins at 8pm (doors at 7pm), and tickets are available at the door for $5.