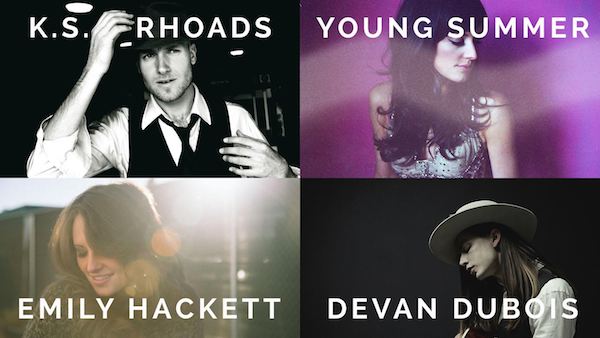 There’s not enough secrecy and surprise anymore. When everyone knows Batman is Bruce Wayne and orders off the “secret” menu at Starbucks, I think we’re doing something wrong as a society. Fortunately, Closeup.FM and Cause a Scene recognize that. They’re sponsoring a show with k.s. Rhoads, Young Summer, Devan DuBois, and Emily Hackett at a “secret 12 South Location.”

Could it be held at the Frothy Monkey’s hidden room where they’re always a free space and faster WI-FI? Or an underground tunnel between 12 South Tap and Edley’s? Maybe we’ll all stretch it out to live music at 12South Yoga. We can’t reveal the mystery location, but ticket holders will be notified of the location before the show.  Heads up, we hear there are a very limited number of tickets left, so don’t dilly dally. Continue reading for the scoop on Wednesday’s lineup!

If you’re new to Nashville or if you’ve been recovering from an extreme bout of hermetism, k.s. Rhoads is a local-based treasure. He writes and performs smartly arranged, densely melodic indie pop and American folk. Listen to one of our favorites, “Orphaned”, to see those sounds fronted by Astronaut Rhoads.

If there’s one thing you can count on, it’s k.s. Rhoads doing something unique and creative. The guy has performed at TEDx, Lightning 100’s Live on the Green, and East Nashville Underground. So it’s not surprising Rhoads is bringing his inventive songs and sensibility to Wednesday’s secret show.

Young Summer, nom de plume of Bobbie Allen, has a gorgeous alto voice akin to BANKS and makes wavy sounds in the vein of Beach House, with a dash more synth. With only a few singles and an EP out, we don’t have enough Young Summer to play during the entirety of a lazy Sunday, but Wednesday’s set should give us more to vibe with. “Waves That Rolled You Under” kicked up some late summer 2013 buzz, and we’re not afraid to keep it in the rotation.

On the flip side of all this wonderfully produced music, Devan DuBois offers raw blues-rock with surprisingly heavy beats. There’s not much in the wild at the moment, but we uncovered this rough mix of “Too Many Aces.” Hey, it wouldn’t be a mystery show without a mystery artist in the mix, right?

Cleveland to Atlanta to Nashville transplant Emily Hackett writes music full of tenderness. But just when we get comfortable, she hits us with some realness that brings us back to Earth. That makes her self-described genre of “Front porch-loving, bit-of-Southern-Rock truckin, tell-it-like-it-is Singer-Songwriter” even better. Watch this confessional, live take of “The Part They Don’t Tell You” below.