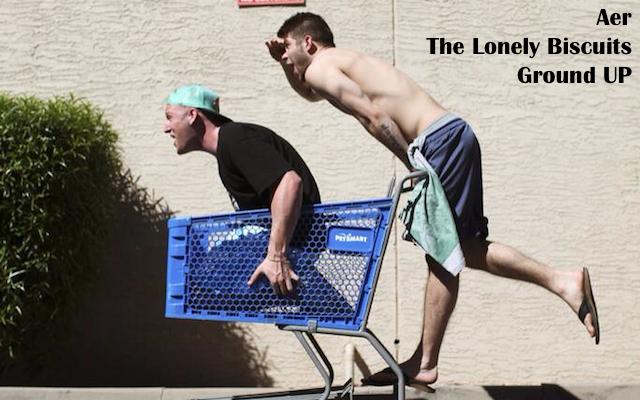 In honor of the recent slew of sunny days, we’d like to bring to the attention of our readers a particularly upbeat and peppy show that’s going down tonight at Exit/In. The headliner is Boston-based duo Aer, who will be joined by hip-hop trio Ground UP, and local party favorites the Lonely Biscuits. All three of these acts are well known for their cheery dispositions and downright fun music, which basically guarantees the event to be a good time. The party starts at 8 p.m. (doors at 7) with Ground UP, and tickets are still available for only $16. Per usual, this one is 18+ (sorry kids).

This show seems poised to be one of the more fun, summery shows of the weekend, and we’re quite pumped to see these acts and hang out with you readers. In the meantime, take a minute to educate yourself on the bands after the jump.

Aer are one of those bands that possess the unique power to immediately transport listeners to faraway places (preferably with rum and sandy beaches). There’s just something very appealing about the vibes that Aer masterfully create, with playful transitions between rapping, hooks, and acoustic jamming. On top of that, this Boston duo actually employ rather thoughtful and interesting lyrics, which give fans another avenue through which to connect with the group. In all, it’s not hard to see why these fellows have achieved their level of success, and we can basically guarantee that their show tonight will be spectacular.

If you’ve been around the Nashville music scene for long and still haven’t heard of The Lonely Biscuits, we really have to wonder how you managed not to become familiar with these guys. This funky four piece has been blowing the scene up around here since their inception in 2011, and a quick listen to their music will tell you why. Their tunes are soulful yet playful, and are the obvious products of labors of love. We’ve been big proponents of these guys for awhile, so it shouldn’t come as too much of a surprise that we wholeheartedly recommend you get out there early enough tonight to check out the Lonely Biscuits.

Ground UP is the stage name for the Philly-based rap trio consisting of MCs Azar, Malakai, and producer Bij Lincs. The group have been going strong since 2008, and have made a name for themselves by touring colleges and playing as many live shows as possible. Their reputation as a killer live act has allowed Ground UP to open for a number of hip- op legends, but the group seem poised to leave their own mark on the history of rap as well. You can witness a piece of this history tonight at Exit/In, if you so desire.