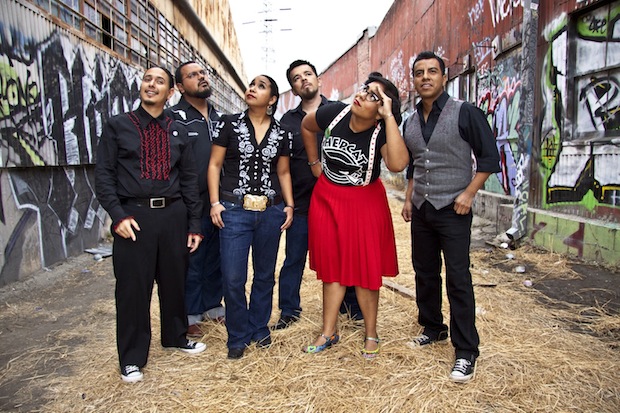 LA-based, Mexican-American six-piece La Santa Cecilia have shared the stage with big names like Elvis Costello and Stevie Wonder, and have had their music featured on popular shows such as Weeds and The Bridge. They’ve already won a Latin Grammy, signed a deal with Universal Latin, and released their latest LP, the group’s fifth in five years, Someday New, earlier this year. La Santa Cecilia are positioned for broader crossover success than ever in 2014, and we’d say they’re off to a pretty amazing start!

When the name of your band is based upon the patron saint of musicians, you better bring it, and this group does just that. Blending many types of traditional Latin music like cumbia, mariachi, bossa nova, and bolero with American rock, blues and jazz, they sing mostly in Spanish, but you don’t have to be fluent to appreciate their talent. They even have a Latin-infused cover of The Beatles’ “Strawberry Fields Forever” on the aforementioned new album. Keep scrolling for a better idea of what we’re talking about, and be sure to check them out live on the farm this summer.