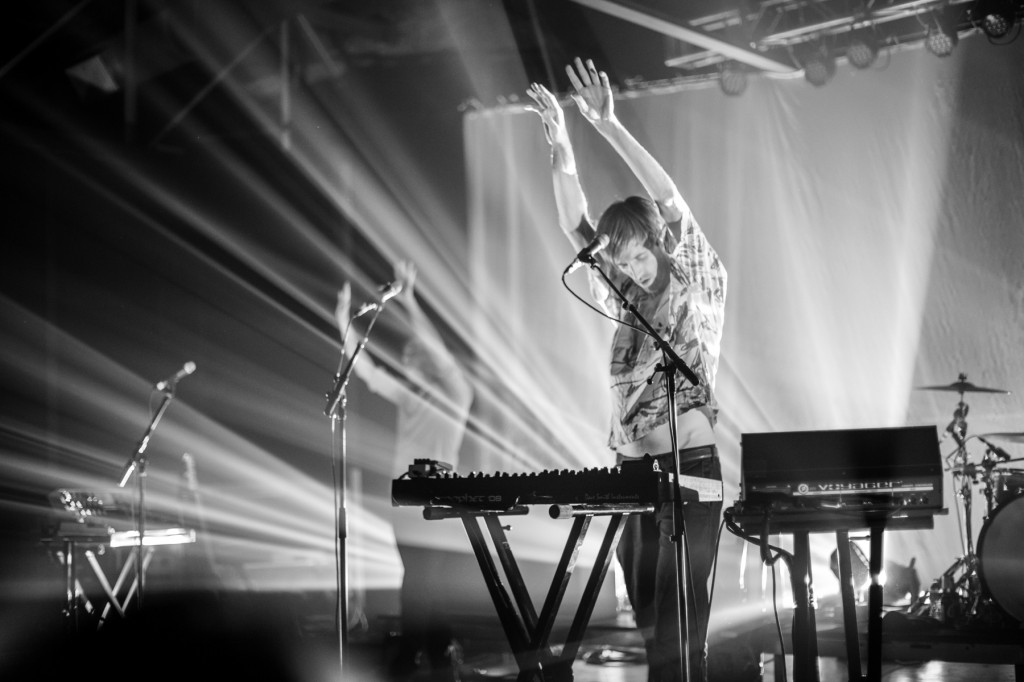 When a stellar and internationally famous Australian band like Cut Copy plays a show in Music City for a measly twenty bucks, you’d probably think the venue would fill up faster than breakfast at Pancake Pantry on a weekend. Well, get this; Marathon Music Works sold only about 400 of its 1,500 available tickets for Cut Copy and Jessy Lanza last wednesday. To any of those 400 that are reading, congratulations. But to the rest of you who stayed home… try not to bang your head on the keyboard too hard as you read this awesome show’s review, or take a look at its photos.

Hamilton. Ontario sent Marathon some interesting new beats with electro-R&B vocalist Jessy Lanza. In 2013, she released her debut album, Pull My Hair Back, with the UK label Hyperdub. Under a lulling blue lighting, Lanza stood alone onstage. Slow and steady, her music was dreamlike, with breathy vocals over snappy percussion. Her sound is intelligent, spacey, and, I dare say, erotic. The layers of her songs draw you in so much that particular sounds become almost tangible, and her song “Against The Wall” is a great example of this, with its intriguing 8-bit Pitfall whipcrack. Another, more catchy beat we recommend is “Kathy Lee,” and you can check it out, strut-dancing man and all, at this link.

Even though there were only about 400 people cheering for Cut Copy as they stepped into the lights, it was a thunderous welcome, fit for a Roman Colosseum. Cut Copy are an Australian synthpop dance-punk band created by DJ Dan Whitford in 2001. They have four studio albums (their most recent being Free Your Mind) and an EP. If you’ve never heard this greatness before, imagine this: A time machine brings Dead or Alive and A Flock of Seagulls back from the ’80s to party with Daft Punk and Yeasayer. That’s Cut Copy.

They began with an explosion of energy concentrated into their hit “We Are Explorers,” and the crowd answered with singing and dancing. Whitford’s history of graphic design became evident in the visuals, as every song was paired with a different artfully composed light show with strobes, beams, and projected images. Funny that one of Cut Copy’s biggest hits is called “Lights and Music,” which, by the way, had the most epic buildup to the drop, when the audience collectively lost their minds and started jumping with their arms in the air. If, somehow, a member of the crowd wasn’t visually satisfied with the rainbows, mountains, rivers, and hypnotic vortexes behind the band, there’s no way that a person could be bored watching guitarist Tim Hoey. He kicked at ghosts and flailed around like his guitar had come alive and was trying to fly off stage. Later, he stood over drummer Mitchell Scott and repetitively falcon punched the crash cymbals with a tambourine. A few other songs on their setlist were “Hearts On Fire,” “Free Your Mind,” and “Let Me Show You Love,” which had this strong walk of a bass beat. Before starting their encore, Dan informed the 400 lucky listeners that they would be the first audience anywhere to hear a new song, “Walking In The Sky,” live. As if we didn’t already pity the rest of you enough.