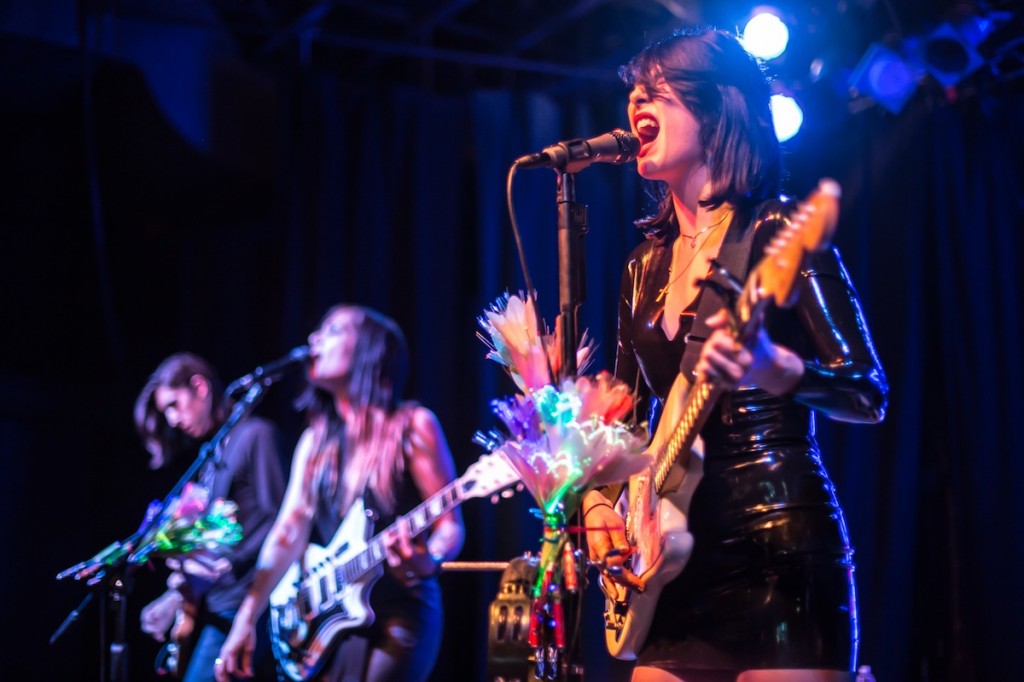 Exit/In might be one of Nashville’s diviest venues, but it’s never been easier on the eyes than it was last Tuesday. The lo-fi/dream pop band Dum Dum Girls headlined with Portland’s Blouse, and they both left us with happy ears and thumping hearts. Dum Dum Girls are at the start of a very long tour scheduled through June, which will, no doubt, be mercilessly breaking hearts all over North America and Europe. We had the pleasure of hearing both of these bands on Tuesday, and you can read the full review with photos after the jump.

A young local band called No Good started off the night with fuzz-heavy guitar and an ornery bass drum that kept sliding away from their drummer. While it was a bit of a rough show for them, they show a lot of potential for becoming Nashville’s next JEFF the Brotherhood, and busted out a killer cover of Weezer’s “Sweater Song” that had the whole crowd singing along.

If you like Beach House or The Cure, stop what you are doing, and listen to Blouse’s latest album, Imperium, immediately. Blouse has that ambient and dream-like sound with smooth melodies that leave you foot-stomping, smiling, and sleepy eyed. Their song, “Into Black”, was particularly awesome and has been added to our list of favorites. Afterwards, lead singer Charlie Hilton switched her electric for an acoustic guitar to play another of Blouse’s staples, “A Thousand Years”. While the synth was ace, and Charlie’s vocals were smooth and mezmerizing, we feel compelled to give special mention to Paul Roper’s mad drumming skills. With his kit illuminating lime green, he was a flurry of clean and creative fills and beats. We watched with anticipation as his large framed glasses slid down his nose over and over again, and he would somehow find the time to effortlessly push them back Steve Urkel style. Check out Blouse’s music and tour dates at their website, www.blouseblouse.com.

By the time the ladies in black took the stage, Exit/In had doubled in volume. Dum Dum Girls are led by the talented and devilishly beautiful Dee Dee Penny, who started the band in 2008 out of Los Angeles. The curious name “Dum Dum” comes from an Iggy Pop song and an album by The Vaselines, and they have released three studio albums under the wildly successful Sub Pop label, with their third album, Too True, set for release this year. However, Dum Dum Girls began their set with a hit from their second album, Only In Dreams, called “Bedroom Eyes”. We’ll be honest, four captivating women in black with eyes that turn a man to stone are a bit distracting, but there’s no overlooking the amount of talent they all have. The music is tight and practiced to perfection, with four part harmonies that could shame the women’s choir at any Nashville church. We dare you to try to listen to “Lord Knows” without bobbing your head. For the last song of their encore, Dee Dee holstered her guitar and stood on the edge of the stage, stared into our souls, and sang the epic “Coming Down.” It’s true, we walked out of the Exit/In a bit lovesick, but as Disney’s Tito the Chihuahua said, “if this is torture, chain me to the walls!”

Bonnaroo Band of the Day: The Preatures