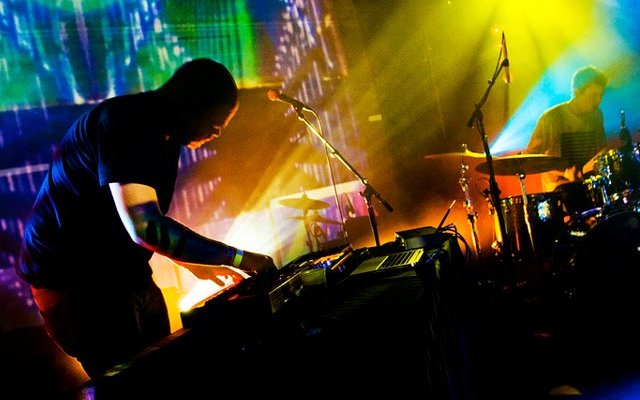 The music industry as a whole seems to be in a transitional period regarding its attitude towards the sounds of the 1980’s. Just 10-15 years ago, we finally found ourselves removed enough from the 70’s to start classifying those sounds as vintage rather than simply old, which led to an explosion in psychedelic, 70’s influenced acts. Well friends, we at No Country believe we might be close to reaching that same point with music from the 1980’s, which is good news for artists like Com Truise that make their living from modern interpretations of these sounds. If you haven’t been exposed to Truise yet, his sultry electronic synths and classic drum machines carve out a nice little niche for Truise, allowing him to distinguish himself from the multitudes of other acts on the scene these days. If that sounds like something you’re interested in, we’d love for you to stick with us through this jump to learn about Com Truise, Phantoms, and Black Cat Sylvester. All three of these acts are playing tonight, March 9, at the Exit/In starting at 9 p.m., so if you like what you hear you should make an effort to go out and catch the show. Tickets are still available for a mere $15.

Com Truise is not only a fun spoonerism of Tom Cruise, but also the stage name for New York/New Jersey based electronic artist Seth Haley. Haley really only hit the scene in full force back in 2011 with the release of the Cyanide Sisters EP, but his following has grown exponentially since that time. As we mentioned in the opening paragraph, much of the success of Com Truise comes from Haley’s unique ability to integrate classic late 70’s and 80’s synth and digital tones into modern works. You should be able to easily recognize the antiquity of many of his digital tones (they were at the dawn of the digital era, after all), but don’t take that to mean the music is in any way cheesy. Instead, Truise comes off as a sophisticated and intricate modern work that built heavily off the shoulders of its influences.

Joining Com Truise will be LA based electronic masters Phantoms. While Com Truise delights in infusions of atmospherism, Phantoms takes a much more straightforward, in-your-face approach with their blend of tunes. Their newest single, “Colors”, is a straightforward dance track, basically guaranteed to get some bodies moving. If you want to get a taste of what we mean, check out the embed below, but we promise that you can’t go wrong by showing up for the Phantoms set this evening.

The first opener for the evening is local act Black Cat Sylvester. By far the most interesting aspect of Black Cat Sylvester is the unique instrument he employs. Called the Synth Table, Black Cat (as fans typically refer to the group) used his intricate knowledge of synthesizers, tone generators, and turntables to create a unique instrument that lies somewhere in between a synthesizer and a turntable. Obviously, this allows Black Cat to produce tunes unlike anything else you’ve ever heard before. Plus, it definitely makes this stellar musician stand out from the hundreds of other DJs out there. Take a listen at the unique Synth Table in the video below, or better yet come out see it live tonight at Exit/In.