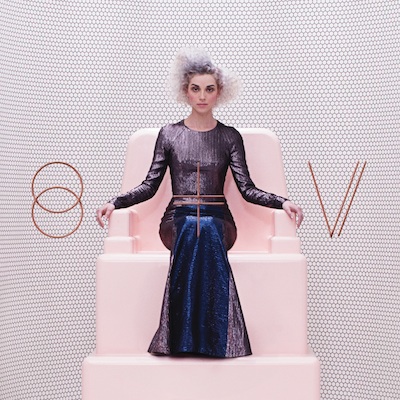 Let’s be real. St. Vincent (aka Annie Clark) is a babe. She’s a vision of beauty that makes her brilliant and odd artistry pleasantly overwhelming. Perhaps you’ve been in love since her debut Marry Me, caught on during Actor, felt the revelation of Strange Mercy, were spell-binded by the perfect musical marriage of Love This Giant with David Byrne or are just now discovering her with the brand new St. Vincent. The glaring, undeniable truth is that you must (yes, MUST!) experience her live. Don’t miss your opportunity to marvel in awe at Marathon Music Works TONIGHT! Lucky for you, tickets for her show are available at the moment!

The celebrity that is St. Vincent is rightfully earned. A cameo on Portlandia, multiple late night television performances, gushing critic responses from NPR Music, Rolling Stone, Pitchfork (the list goes on and on) and a recent appearance on The Colbert Report showcase that the musical popularity platform can sustain depth that far surpasses the “hit” of the moment. Part of the genius of her craft is that she writes both vivid banger pop songs and lush ballads. The transformation to a live show is truly a spectacle.

“I wanted to make a party record you could play at a funeral,” says St. Vincent of her newest self-titled gift to the world. The album was produced by John Congleton (who she worked with on Strange Mercy) and is the ideal elevation of her inventiveness.

Though the album is another exceptional piece of work, the luminous tracks are the following:

“Rattlesnake” , a song that is lyrically a page in the life of Annie Clark, the enigma. “I went walking around this great expanse of land. There was no one around so I decided to take my clothes off and immerse myself in nature,” she said of the lead track. “I saw holes in the path, but did not put two-and-two together until I heard the rattle and caught a glimpse of the snake.” The hype “Birth In Reverse” with lyrics “Oh what an ordinary day / Take out the garbage, masturbate.” “Prince Johnny” , sounding as if it was made as the precursor to the track “Strange Mercy.” Trip out on repeat to her voice with lyrics “So I pray to all” and you’ll see why she’s a goddess. “Bring Me Your Loves” delivers a dose of Yeasayer and “Every Tear Disappears” gives the spaced out, heavy feeling that we all love so much about her. Behold the audio / video for “Digital Witness” for insight to what the night will bring.

Noveller, the solo project of Brooklyn-based guitarist and filmmaker Sarah Lipstate, will open the evening.

St. Vincent and Noveller will perform TONIGHT at Marathon Music Works. The show is 18+, begins at 8pm (doors at 7pm) and tickets are currently available for $25 day.