Living legend Morrissey is *fingers crossed* performing at The Ryman on May 28, for his first Nashville date in nearly a decade. Following a year of setbacks, the singer has kicked off 2014 reenergized, propelled by the smash success of his first memoir, a brand new record deal (and forthcoming tenth solo album), and a couple of major milestones: 2014 marks the 30th anniversary of Moz’s former band, The Smiths’, debut album, as well as the 10 year anniversary of the singer’s career-reviving You Are the Quarry. All week long, we’re going to be bringing you some special Morrissey-themed content, and, in celebration of the show, we’ll be giving away a pair of tickets! Kicking things off, we’re helping you get to know a bit more about Morrissey and opener Kristeen Young, so keep reading for our show preview and contest details!

It’s been over 25 years since The Smiths disbanded, and, in that time, former frontman turned solo act Morrissey has transcended to an iconic status few living artists ever manage to achieve. As one of rock’s most influential (and outspoken) figures, the English-born singer has, over nine albums and countless b-sides and compilations, proven his ability to stay timeless, his style propelled more by subject matter and thematics than musical aesthetics. Deeply connected with his fans, a Morrissey live show isn’t just a concert, it’s an other-worldly experience, and one that, especially in a place as historic and sonically honed as the The Ryman, every music fan should experience, Moz superfan or not.

There’s a good chance that if you’ve been to a Morrissey show over the past couple of years, you’ve seen Kristeen Young open. A bit of a left-field pairing from a stylistic standing, Young is, apparently, one of the few contemporary artists Moz enjoys enough to invite to share his stage. Known for her aggressive delivery, Kristeen has honed her unorthodox alt rock sound over 17 years and six albums (with a seventh on the way).

This time around, we’re giving you MULTIPLE WAYS TO WIN. You can just pick one entry method or do all three, with up to FOUR chances to win tickets (one entry per method per person, please)! Winner will be announced Monday, March 17 at 6 p.m. CST, and will receive a pair of tickets.

Here’s what you have to do:

Simply use this form (you will be redirected to your e-mail, where you will need to hit send):

If you’re having issues with the above form, you can alternately send your full name in an e-mail to [email protected] with “Morrissey Giveaway” in the subject line. 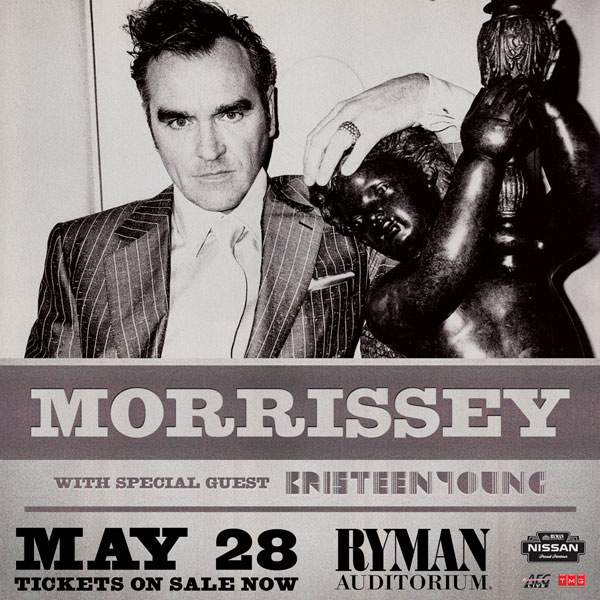 There’s another ticket giveaway happening on Instagram, so head here before Wednesday, March 5, for details (and follow No Country and AEG/TMG while you’re at it), and, of course, tickets are still available to purchase here.