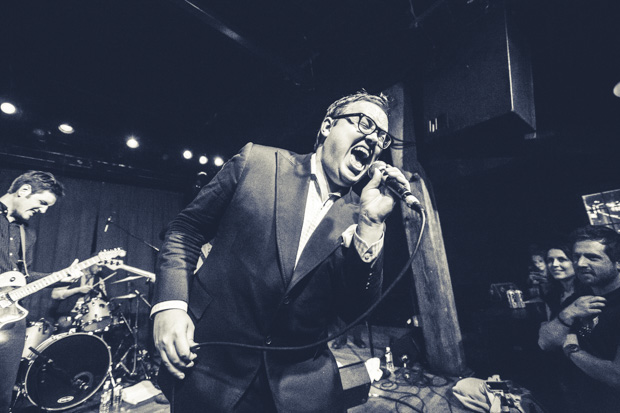 St. Paul and the Broken Bones. Photo by Shawn Jackson.

When word first broke that Birmingham seven piece soul revival band St. Paul and the Broken Bones had sold out Mercy Lounge, it was hardly surprising to us over here at No Country. After all, the group, led by Paul Janeway, a shockingly talented singer with a classic frontman attitude, absolutely killed their Live on the Green performance; furthermore, just a few weeks ago, the band put out Half the City, their first ever full length record. Add into the mix that local instrumental rock duo (though five piece for live purposes) Steelism, a perpetual favorite around these parts, was the opener, and it begins to become obvious why there was so much interest in this show. Well, luckily for you readers, we snuck into (figuratively, we had tickets), and we brought along one of our best photographers, Shawn Jackson. While he was taking the fantastic pictures you can find after the jump, we got to experience both these bands live. It was a riveting performance, and we’d love to tell you all about it. In fact, we will tell you all about it, if you’d be so kind as to follow us through the jump. Geronimo!

As mentioned in the first paragraph, the evening began with an engaging performance by the Nashville based Telecaster and pedal steel duo Steelism. Now, this group is instrumental, but don’t let that throw you off. It definitely threw some of the attendees last Thursday for a loop, and it would be a lie to say we didn’t hear a number of people dropping snide comments like “this song’s called “Blind Beggar”? How do you even name a song without lyrics?”

It would be safe to say that Steelism took all of 9.3 seconds to shut these types of people up.

Yes, while it is true that Steelism does not sing over their music, this two piece (with three additional talented supporting artists for the live show) is most certainly not any less engaging than even the best of singers. It would be tough to ascertain exactly why this magnetism exists, but it may be due to overly catchy and driving bass grooves or the mesmerizingly talented solos (especially those organ solos…mmmmm). Whatever the reason for the attraction, one thing is for certain: listening to Steelism, especially the song “9 to 5 Jive”, makes us want to form our hands into little peace signs and move them horizontally across our eyes, like the dance Vincent Vega does in Pulp Fiction. Come on, we know you know that dance. Did you know it’s called the Batusi because it first aired in an Adam West era Batman episode? We didn’t even know it had a name, but it’s true.

Sorry for getting a bit distracted up there, but the point we were trying to make is that Steelism has basically figured out how to create a captivating, fun, and danceable sound, and they’ve figured out how to do it without the aid of a singer. Also, they closed their set with the James Bond theme, which only further bolstered their awesomeness in our book. Their fun demeanor and talented chops has helped Steelism become one of the fastest growing groups around Nashville, and we couldn’t be happier for them.

While much of the strength and uniqueness of Steelism come from the fact that they must compensate their lead lines to make up for a lack of singer, the opener for the evening, St. Paul and the Broken Bones, lies on the entire other end of the vocal spectrum. Led by the spectacularly talented (and apparently canonized) frontman Paul Janeway, this group delivers Southern fried soul exactly how you would want it: crispy, tantalizing, and altogether satisfying.

On second thought, we have no way of proving St. Paul and the Broken Bones’ music as crispy, but we’re sure about the other descriptions. In fact, there might be no other way to describe the music St. Paul puts on as tantalizing; for whatever reason, that classic, funky, motown-esque sound that St. Paul so excels at seems to have no trouble tightly grasping listeners and keeping them focused on the show at hand. We would spend time here describing how the various falls and swoons of this crooner kept the show alive and interesting, but to be honest, there’s not a way we could describe Paul Janeway’s voice that would give you any real understanding of what he sounds like. In each and every line of the performance, there was some subtle intricacy, some detail that added to the overall impact. Describing these in the precise detail they deserve goes far beyond the scope of this article, but suffice it to say that St. Paul and the Broken Bones absolutely killed it.

Oh yeah, and that third adjective from earlier, that said St. Paul and the Broken Bones put on a show that was “altogether satisfying?” That show encompassed more than just Janeway’s vocals. We loved the tasty horn lines, and everyone knows there can be no soul with a proper bass line. In all, this performance just came together so well from all angles, which made it rather obvious why this band has been invited to play Bonnaroo this summer. However, we urge you to see this band before then, as we still can’t stop telling people about this show. Until you get a chance to do that, however, why don’t you enjoy these awesome pictures by Shawn Jackson.