[Women Who Rock] An Interview with Jaclyn Monroe 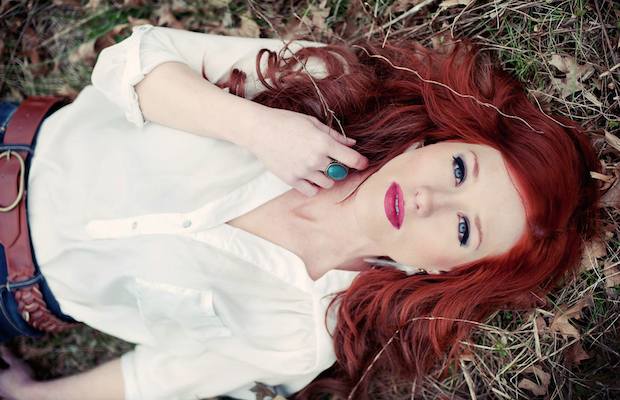 We at No Country are continually committed to elevating the profile of the too often overlooked local artists that make Music City so exceptional – so we couldn’t be more excited to pair with Anna Haas (host of the fantastic Women Who Rock series) to spotlight local ladies making their mark on what has all too long been a male-dominated industry.

This week, we’re taking a look at Jaclyn Monroe and Anna has done the honors of spotlighting this songstress to help folks get acquainted with Ms. Monroe in advance of her EP Release show this Thursday at 12th & Porter! Catch Jaclyn this week and stay up to date on the Women Who Rock Nashville here.

When singer-songwriter Jaclyn Monroe moved to Nashville two years ago, she was couch hopping, song-writing and trying to get her feet on the ground. She purchased a lottery ticket from a local gas station and won $500. What did she do with her lucky hand? Blow it on new clothes or an expensive dinner? No, she used it to shack up for a month at an Extended Stay America, set up some recording equipment and immediately got to work recording demos of her original tunes.

Clearly dedicated and immensely talented, Jaclyn has worked hard to continue procuring her own luck here in Nashville, vigorously working on her debut, self-titled EP, which will be released Thursday at 12th & Porter. With intelligent lyrics, intricate, soulful arrangements and husky vocals reminiscent of Rachael Yamagata, Etta James and Brandi Carlile, these new tunes are sure to pull at some heartstrings.

No Country: How long have you been in Nashville?
Jaclyn Monroe: Going on 2 years. I’m really excited to be in a place that is so opportunistic for creative people. There is so much talent and support here. Feels like home to me now.

NC: How long have you been working on your upcoming, self-titled EP?
JM: I guess you could say a few years. Between being inspired to write new material and also rejuvenating some of my older music, I put together an EP I feel represents me as artist. The actual recording process has been in the works since last year.

NC: What was the most thrilling part of making this record?
JM: Hands down, hearing the cinematic manifestation of my songs the way I’ve always heard them in my head. Dramatic strings, organs, and layered harmonies. Watching each song come to life was so exciting!

NC: How do you feel that Nashville has influenced the journey of your music?
JM: When you make a move to a music city, like Nashville, you realize that you HAVE to not only love what you do but be willing to work hard for it. I discovered that pretty quickly and aligned myself to put in the time and effort to launch my career in the way I have always envisioned. I’ve met a lot of important, key people in every aspect of this business during my time here. I feel lucky to have gleaned from their input, wisdom & experience to help put all the pieces of launching a music career in motion.

NC: Alright, cheesy question, but what artists do you feel have influenced your music?
JM: I have a broad range of influences from artists like Etta James, John Lennon & Elton John all the way to Brandi Carlile, Rachael Yamagata, David Gray & Adele. I have always gravitated toward soulful music. I love R&B, folk, jazz and… the list goes on.

NC: Who’s opening the show for you?
JM: Artist & singer/songwriter, James Weston will open the show. He is truly a hidden jem in the Nashville music scene. He has a nostalgic vibe stemming all the way back to artists like Joe Cocker & Bob Dylan to the current Ray Lamontagne. He is a multi talented artist who will captivate you from the moment you first hear him and will make you an instant fan. Following Weston, will be Sam Hunter & The Two Tones. A Nashville Native with an energetic, throwback, early rock & roll style that will keep you jamming along through the entire set. I’m excited to have both of these artists on the bill to deliver an entertaining show!

NC: What other bands have inspired you or rocked your world since you’ve been in Nashville?
JM: Kenny Olson, J Kott and their band perform every Sunday at Soulshine in Midtown. They are inspiring every time I see them play and make me want to be a better musician. Anna Haas is another refreshing artist who breaks the mold of Nashville and can’t be put in a box. Her live shows are engaging, entertaining and leave you wanting more. Walter Egan is another artist and friend of mine who has inspired me through his successful career in music and continued journey as an artist, singer/songwriter.

NC: What’s next for you after the release? Anything exciting on the horizon we should be keeping an eye out for?
JM: My next big gig will be in Austin, TX in the beginning of March. The show is sponsored by Red Gorilla Music Festival.  I will also be releasing a few music videos alongside my upcoming single, “Burn” scheduled for early summer. Also, my team at ‘Tinderbox’ currently has radio promotion underway and are shopping my music for Film and TV Sync. Between that and touring, 2014 will be a busy and exciting year for me and my band.

Now that you know a little bit about Jaclyn, get on out to her EP release at 12th & Porter this Thursday at 8:00pm ($8 adv, $10 door, 18+). Everyone in attendance will receive a free digital download of Jaclyn’s new EP! Sam Hunter & The Two Tones and James Weston are supporting. Tickets available in advance here!  Jaclyn’s official site on this jump.