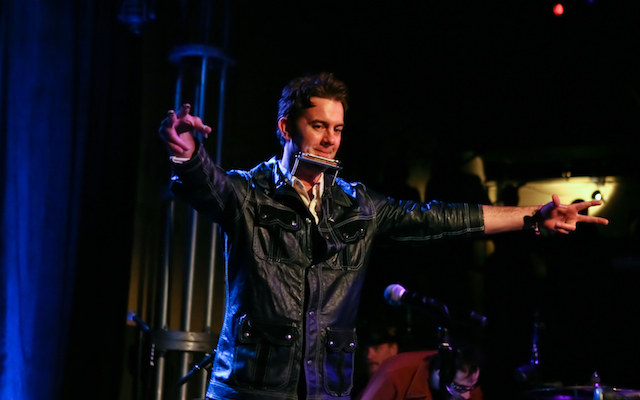 We don’t want to jinx it, but it seems like spring may be just around the corner for us here in Nashville. After all, this last week has seen the temperatures slowly climbing, and we’ve been feeling a lot more of those heat and UV rays from that great ball of fire in the sky than we were just a few weeks ago. That special springtime optimism is slowly taking hold of Music City, causing its citizens to happily reflect that winter is finally dying away. There could not have been a better time, then, for G. Love and Special Sauce, one of the most upbeat and sunshiny bands out there, to pay Nashville a visit last Sunday. We made sure we were at 3rd and Lindsley to check out both G. Love and his awesome opener, Kristy Lee, as well as to order some delicious food and cheap beer. We took one of our favorite photographers with us, Michael Brooks, so be sure to meet back up with us after the break to hear more about our evening and check out some spectacular photos.

By the way, this event was put together by our friends over at Lightning 100, and actually was a live broadcast for their Sunday evening programming. In fact, if you tuned into 100.1 FM from 8 pm – 10 pm, you probably heard us cheering in the background.

If you haven’t been out to 3rd and Lindsley since they’ve remodeled, the place feels a lot bigger now. Sure, the capacity is still only 500 people, but trust us: when the place gets full, it feels quite full. It was definitely full the night of G. Love, and in all honesty was close to capacity towards the beginning of Kristy Lee, the opener. Lee, who was joined by a spectacular bassist and a talented (and quite attractive) drummer, is mostly known for stellar vocals. This reputation is twofold; on one hand, many people have respect for the lyricism of Lee’s tunes. Anyone who listens to Kristy Lee on a regular basis should find this hardly surprising, as Lee’s writing is nothing short of breathtaking. However, equally as dazzling is Lee’s actual singing ability. Her voice swoons and sweeps, sometimes oozing with intensity and other times cut back for a delicate soft section. Lee seems to have absolutely mastered the art of dynamic range in her singing (check out her cover of Bill Wither’s “Grandma’s Hands”), and it couldn’t have impressed us more. Furthermore, she kept consistent with the upbeat attitude of the evening, and her songs were fun and tended to involve some level of audience participation. In short, it’s obvious why she was asked to tour with G. Love, as her strengths were very much in line with his.

Following Kristy Lee’s performance, we ordered another beer (the event was partially put on by Yuengling, so beer was only $2 each. Nice!). There was a brief break from the live music, but soon enough headliners G. Love and Special Sauce took the stage. We wanted to avoid comparing G. Love to Michael Franti, as it seems every G. Love review does just that, but in all honesty there’s no better benchmark to use to describe G. Love’s sound. That’s not to say that G. Love doesn’t have his own unique sound, but rather to say that fans of that sunshiny, good-vibes-all-around acoustic hip hop sound will certainly find G. Love to their liking. The man seems to be built out of smiles and warm days on the beach, and that attitude proved to be quite infectious to the people of Nashville. Perhaps it’s because we were in a seasonal transitional period, but G. Love seemed to know exactly what the crowd needed. He played most of his hits, including the ineffable “Baby’s Got Sauce”, and the crowd ate up every minute of it. Like Kristy Lee, G. Love performed with only two other musicians (his Special Sauce). The trio proved to be a perfect balance of space and sound; the sound was uncluttered and inviting. In the 22 years this trio has been on stage, they’ve proved time and again their unique ability to captivate audiences, and it would be safe to say that their show last Sunday perfectly followed this trend.