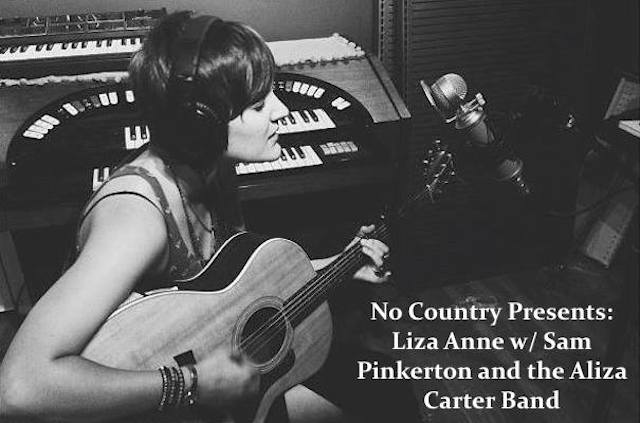 Every so often, an artist jumps out of the fold and takes the musical world by surprise, and it is our belief that Liza Anne is one of those artists. We wish her all the best, which is why just in the last couple of a weeks, we’ve told you readers all about her amazing video and the release of her debut album, and even sat down and for an interview. Hell, she even had Ryan Seacrest premiere her newest video for “Rubble” (don’t worry, we’ve got it embedded below). Today, however, we’ve got our most exciting piece of Liza Anne news yet: our live events team, No Country Presents, will be collaborating with Anne and her wonderful openers Sam Pinkerton and the Aliza Carter Band to put on a show TONIGHT, Feb 21st, at The High Watt! Things kick off at 8 p.m. (doors at 7), it’s 18+,  and you can pick up tickets for only $7. But first, plug your  nose, close your eyes, release a sigh, and take the jump with us as we learn more about Anne and her wonderful openers.

As we mentioned, we’ve told you guys a lot about folk songstress Liza Anne over the last couple weeks. Liza first appeared in the public’s eye with her shockingly smooth and relaxing cover of the infamous “Wrecking Ball,” but it’s really her own compositions that stand out as examples of her musical expertise. We’ve already got you covered in previous posts though, so we’ll just refer you to the links above and leave you with this, her newest music video (which Ryan Seacrest premiered).

Joining Liza Anne will be the utterly fantastic Sam Pinkerton. If you haven’t heard of Pinkerton just yet, you’re in for a treat. Sam plays acoustic folk, but trust us: this isn’t your standard Nashville country artist singing rehashed songs you might have already heard. Instead, Pinkerton mixes elements of indie rock and folk to create a memorably comforting sound. Throw on top of that her absolutely stunning voice, and you begin to see just why this chick stands out from the rest of the crowd. Besides being actual friends, Pinkerton and Anne are the perfect musical fit for one another, and you can just tell that between them (and openers The Aliza Carter Band), there’ll be some magic in the air tonight.

Joining Liza Anne and Sam Pinkerton are brother-sister duo The Aliza Carter Band. Originally from Memphis but transplanted right here to Music City, this pair produce a remarkably fragile yet engaging tone; it’s soft, sweet, and very likely to pull listeners into the thoughtful haze that only truly touching music can create. It might have something to do with the eerily well-balanced vocal harmony between the two, or maybe the minimalistic guitar fingerpicking, but, frankly, no matter the reason, this band is great, and you owe it to yourself to see them. Get on out to The High Watt tonight to experience The Aliza Carter Band, Sam Pinkerton, and Liza Anne live and in person. We promise you won’t regret it.