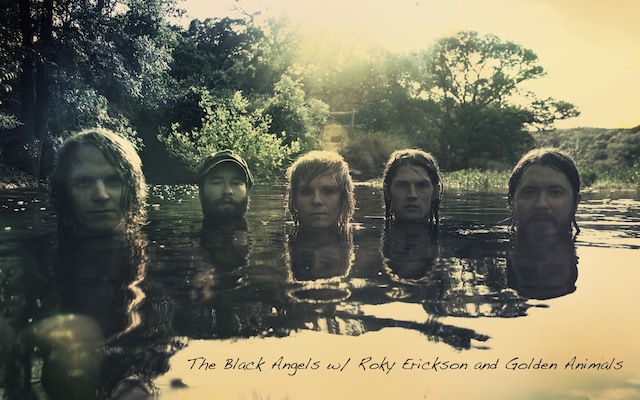 We here at No Country tend to think music a is pretty powerful thing. Shocker, no? However, our opinion on this matter is a touch more nuanced than simply “we like music;” specifically, we like bands that can draw us in, abduct our attention, and instill in us an indescribable sense of both satisfaction and a rabid need to hear more. Don’t let it be said that we don’t know what we like. Anyways, a band capable of doing everything we just listed and more will be gracing the stage at Mercy Lounge TONIGHT, Feb 21st, around 10 p.m., and that band is the one and only Black Angels. This psychedelic, fuzzed-out four piece will be joined by local cult legend Roky Erickson and the ineffable drums and guitar duo Golden Animals for one hell of a show. Tickets are still available (you can pick them up here for only $25), but, first, let’s familiarize ourselves with these icons of the modern day psychedelic scene.

Close your eyes (but finish reading this sentence first) and imagine yourself thrust into the turbulent, trippy, and all around out there world of the 1960s and ’70s psychedelic scene. Perhaps you’re in a friend’s hazy basement, grooving to the tunes of The Doors, or maybe you and some friends are sitting in traffic in your station wagon, waiting to get to some absurdly muddy festival. Regardless, there’s some kind of consistent thread; a universal understanding that this scene is doing something profoundly different and altogether interesting. It is this exact understanding that The Black Angels so masterfully lay their fingers on. In fact, many fans consider The Black Angels to be one of few modern day incarnations of the true spirit of that original scene. This amazing 4 piece is truly a spectacle to behold live, and this band may very well bring you more satisfaction for $25 than just about anything else you could do tonight.

While The Black Angels might be a modern day embodiment of ’60s psychedelia, opener and local legend Roky Erickson was an integral part of that scene. He first started playing in 1964, and soon became popular due to his incredibly forward thinking tunes, intense live show, and, of course, copious amounts of drug use. Erickson would soon pass into legend as one of the real founders of the underground, garage rock and psychedelic scenes. Basically, if The Black Angels are the Immortal Technique of the psychedelic scene, Roky Erickson is Grandmaster Flash. He’s a true OG, and if you have any sort of respect for this type of music, you owe it to yourself to get off the couch and come out to see Erickson’s set this evening.

It gets said just about every time the press mentions them, but the most remarkable thing about Golden Animals is their fullness. The group consists of a grand total of two people, meaning that the sum of their music is nothing more than drums, guitar, and some vocals. Despite that, Golden Animals manages to pull off a sound that is perhaps more filled out than their organ and bass wielding contemporaries. It’s quite a feat, to say the least, and something you really should experience live.