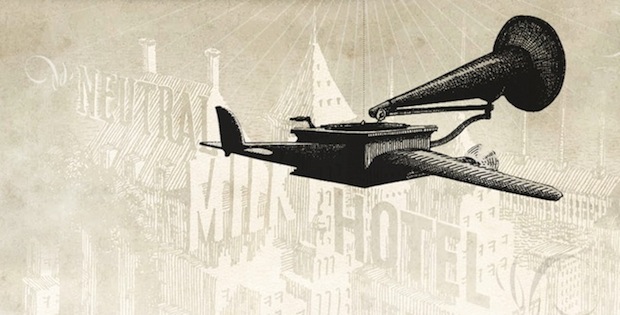 
There comes a time for ever music blogger when the shows we cover and the reviews/previews we write all start to blend together into a vanilla paste of words, sounds and annoying sub-genres. Most of us are unpaid and we basically just do this because we love music. At these moments, we start to think about looking for a real paying job, as a cubicle monkey pounding on keyboards for “The Man” or something of the like, in lue of chasing our dreams of writing for a living.

We wonder if it’s worth all the time and effort we put in, but then we are graced with the extremely rare opportunity to cover one of the greatest, most reclusive bands that has ever been. In situations like these, music bloggers like myself discontinue our bitching, stop feeling sorry for ourselves, cease worrying about our anemic bank accounts and get to work. The Neutral Milk Hotel show at Ryman Auditorium on Feb. 4th, 2014 with Elf Power was one such night and No Country was there, thanking the music Gods that we were in the right place at the right time. For any indie rock fan in attendance it was an amazing night but if you couldn’t be there don’t worry. Just read on after the break and relive it with us.

Sitting down in a church pew, about four beers deep on average, everyone was ready to burst open at the seams! The slight buzz was nothing compared to the giddy anticipation that was washing over us all. It was my first trip to the Ryman and I was already blown away. The mother church of country music has also been called the best live music venue in all of Nashville, which really means something in a town calling itself Music city. After one look around it was obvious this place lives up to the hype.

Elf Power was about two songs into the opening set after I’d grabbed another beer and they were impressive. The female keyboard/multi-instrumentalist was playing guitar using a beer bottle instead of a real guitar slide, which was pretty bad ass. The lead singer had a Jeff Tweedy (of Wilco) vibe to him but his vocal was more Jim Adkins of Jimmy Eat World. He played a beautiful electric twelve string that had us salivating with desire.

Their neo-psychedelic rock kept us jamming all the way to intermission and they are definitely worth some DLs. After a smoke break, another $7 beer re-up, and a bathroom break, we made our way back inside the concert hall with whispered garbles of conversations filling the air. The legendary acoustics are no joke and it made every word of the group five rows down audible. Mostly scene kids past their prime discussing the finer points of Orange Amp feedback loops. There was electricity in the air, a mix of tense suspense and enormous potential energy. We all knew it was going to be a very special night.

A fan of Neutral Milk Hotel since high school, we’d gotten hip to their catalog when many of our favorite bands of that time would reference them in interviews. It’s important to know who your idols listen to and most of ours were way into NMH. They were the original indie band, grand daddy hipsters, before hipster was a thing, whom every band in an indie sub-genre has borrowed from whether they know it or not.

In the late nineties, when grunge rock was fizzling out and boy bands topped the charts, they helped create a breed of rock music that’s sweeping the airwaves today (see Arcade Fire, The Decemberists, Bon Iver, etc, etc). Just as they became “cool,” they broke up, and after nearly a ten-year hiatus it was finally time for the low-fi legends to emerge from hibernation.

Solitary and mysterious, front man Jeff Mangum came out alone and began strumming his vintage acoustic guitar that looked like it was older than 90% of the audience. His mountain man beard would give anyone on Duck Dynasty a run for their money and his thick woolen cardigan would be more fashionable at a tacky Christmas sweater party than on stage at The Ryman. It was obvious that nobody at the show gave a shit what he was wearing.

He began singing the words to “Two-headed Boy”, and slowly the rest of the band joined him on stage to thunderous cheers. After the second song, Jeff encouraged the lower level crowd to leave their pews/folding chairs and come closer to the stage, much to the stuffy ushers’ dismay.

They rocked through a nearly a two hour set and everyone in the crowd was freaking out the entire time. Joy filled our faces and high fives were being passed around like hits of acid at a Widespread Panic show. Jeff only played acoustic guitars but a tremendous amount of pedal effects and amp tricks had them sounding more massive than any Stratocaster. We were all blown away by the array of wonderful noise he was producing; never having seen guitars like that, make sounds like those.

NMH famously despises any media and especially hates bootleggers. No Country couldn’t even get a photographer in, so sorry there aren’t any pictures with this review but whataya gonna do? When some people close to the stage tried to take photos/video, a stagehand instantly bound from behind the curtain and put the kibosh on the unauthorized recordings, nearly snatching away the offenders phones. Jeff seemed to approve of the hardcore approach, giving his goon a thumps up.

“Just enjoy being here, in this moment together, and don’t watch through your screens”, he said in between songs.

Well said and I think most of us couldn’t have agreed more, even if exclusive photos would have been clutch, since there are next to none of these guys online.

They played every type of instrument one could think of, including bowing a banjo, various accordions, horns, and even some handsaws circa 1888. None of it was gimmicky. Just true musicians at their finest, creating unique sounds on a stage that my eyes and ears had never experienced live before. The band received a standing ovation after their set and again after a three song encore.

They say you never forget your first time.  The only problem is The Ryman has been ruined for me forever; there will never be another show that could even come close.  I couldn’t forget my first trip to Nashville’s gold standard of live venues if I tried. Neutral Milk Hotel lived up to the hype; and the ten year hiatus has only made their sound grow richer, their vibe more robust and our appreciation more complete. Better than a finely aged wine, their performance is still giving me goose bumps. If you were there consider yourself lucky.  If you’re even a mild fan of indie rock, and you missed it, your regret is justified.