[Interview] Q&A with Parker Gispert of The Whigs 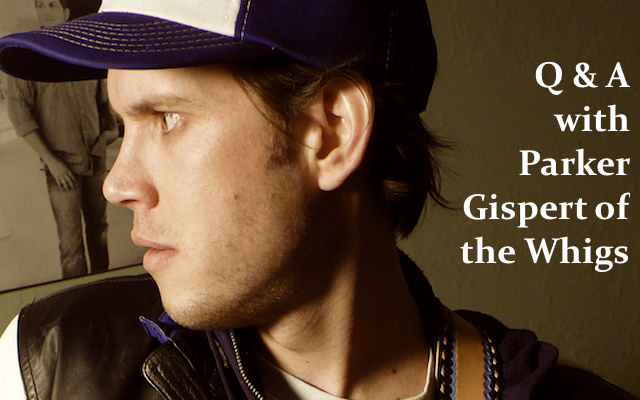 It’s been a pretty Whigs-heavy week over here at No Country for New Nashville. First, we informed readers about their newest single, “Hit Me”, and announced their upcoming fifth studio album. Then, we told you about their show last Saturday, with local legend R. Stevie Moore and party rockers No Regrets Coyote. We then went to that show (and had a great time, by the way), and now we’re coming back to you again with yet another Whigs related piece of content. We know, we know. That’s a lot of Whigs related material to handle in such a short time, but what we’ve got for you today is perhaps the most exciting of all: an exclusive interview with guitarist and singer Parker Gispert. During our chat, we talked about the new album, show posters, and what makes a great three piece band. Find out more about one of Nashville’s favorite indie rock groups from the singer himself after the jump!

No Country For New Nashville: To begin with, while we at No Country do cover national acts and shows, we’re particularly interested in our local tie in. You guys are from around here, and it seems like most of the times we’ve seen you, you’ve played with local acts like The Weeks, R. Stevie Moore, and No Regrets Coyote. In many ways, you guys have grown out of the Nashville scene, but have you made a conscious decision to try to remain connected to your hometown scene?Parker Gispert: Well, we’ve been living here for about two and a half years, but we try to play with local bands wherever we go. We really like playing with locals, whether we’re in Chicago or New York or wherever. That being said, we’re particularly excited for our Nashville show on this tour. R. Stevie Moore is somebody that we’ve looked up to for awhile. We’re really psyched to have the opportunity to play with him.

NCFNN: That’s really interesting to hear an established act such as yourselves taking steps to play with smaller, local acts wherever you go. How do The Whigs typically get hooked up with these smaller acts?
PG: A lot of the time, people will just send us emails or contact whoever is booking the show and just ask if they can play with us. There’s all sorts of ways; people just figure out some way to get in touch, and once they do, we try to work together to get a bill squared away.

NCFNN: Changing gears from the live show to the studio, we’ve heard there’s a new album in the works for this spring. We heard the lead single, “Hit Me”, but can you tell us anything more about the album? Did you use any different approaches than your last four studio records?
PG: Yeah, we did actually. This is definitely going to be our most primal, raw, rocking record so far. We recorded it outside of Los Angeles, and we tracked almost everything live, as a group, with everybody playing at the same time. We tracked and mixed a song every day for a few weeks, although we did a lot of rehearsal beforehand. It helped us to become ready, however, and we really walked in there and knocked it out.

NCFNN: That’s actually one of our favorite aspects of your music; for a three piece act, you guys have an incredibly full and energetic sound. In fact, primal is a great word to describe it. How do you guys pull that off when much larger bands can’t seem to nail it?
PG: Yeah, three pieces are a weird thing. It’s definitely a format that doesn’t allow anybody to hide. Everybody has to contribute. I even think that in a two piece, there can be a lead person and their accompaniment, but in a three piece, it really has to be three equal parts with everyone contributing equally to work. If anybody is slacking, they become disposable very fast. Everybody has to pull their weight. I really like the minimalist band structure, with no extra frills. It really puts the songs at the forefront.

NCFNN: Did you guys find that chemistry and equality between band members from the beginning, or was it something that resulted from working together over a period of time?
PG: I think it became apparent really quickly in the beginning. Julian [Dorio, The Whigs’ drummer] and I started the group, and we had a couple different people come in and play bass. If anybody came in and they were basically playing what I was playing, or if they really keyed in with Julian but ignored their melodic duties, we found it boring to play with them. It really took somebody coming in and contributing a lot on the bass for us to realize how important bass is to this band. So in that sense, yes, I think the equality in contributions has always been an ingredient in what we were, from the very beginning.

NCFNN: It’s definitely seemed to work out great for you guys. Do you think this equality might be a factor in why The Whigs have been far more successful than many of the other bands that come out of the Athens and Nashville scenes?
PG: I don’t really know. That’s a tough one. I really don’t know.

NCFNN: It absolutely is. Switching things up a bit, we noticed your name on the bill of the upcoming Shaky Knees festival in Atlanta. It seems like that’s the festival to be at this year if you’re into indie rock; are you guys pumped to be on that lineup?
PG: Yeah, absolutely. You know, we’re from Atlanta originally, so we have a lot of friends there. There are people who will be at that show that saw us a decade ago, all the way back in the beginning, which is awesome, but it really means we’ve got to bring something totally new every time we play there. That’s especially true when the lineup is as strong as it is, we’re definitely going to have to bring our A game, but we’re really looking forward to it.

NCFNN: Are you guys going to stay to see Modest Mouse?
PG: Oh yeah! When they were a three piece, we met them one time. I’ve been a huge fan of them; when I was in high school I actually used to run a fan page for them.

NCFNN: That’s awesome. I want to return to something you said earlier in this interview; you mentioned that The Whigs are very much a “songs-first” band. Personally, I think that’s great, but a lot of pop stars and famous musicians nowadays cannot necessarily make the same claim. It seems like the humorous pictures you guys put up on Facebook kind of poke fun at this, but is this a serious problem?
PG: I mean, on one hand I would love to see that, but it’s all good. Most of the time I put stuff on there just for a laugh, but we don’t want to give the impression there’s not a lot of great stuff coming out now. Obviously, a lot of great stuff came out in the past, but it’s all good now too.

NCFNN: Speaking of funny pictures, have you seen the show poster for your Nashville date?
PG: With the pizza?

NCFNN: Yeah, that’s the one. That’s one of the better show posters we’ve ever seen.
PG: That came from our old friend Jordan from Athens; he’s done a ton of posters for us. He just crushes it. He knows how to make a great poster. That’s definitely one of my all time favorites though. Space pizza! 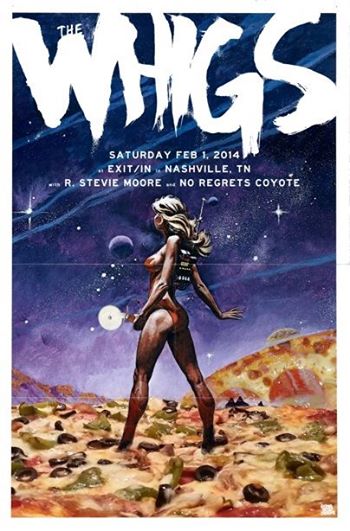 NCFNN: Great! Any announcements you would like to make to fans?
PG: Not really, other than to check out our upcoming tour dates and to listen to the album when it drops.

We would like to give our sincerest thanks to Parker for talking with us, Ryan Kingsbury for hooking us up with the interview, the rest of The Whigs for being awesome, and to readers like you for keeping this site going.

by No Country
Interviews

Returning to Nashville for their first headlining show since 2012 (notably, they passed through last fall to open for...

Kevin Griffin at Pilgrimage 2016. Photo by Mary-Beth Blankenship. It was only a few years ago that Better Than Ezra...