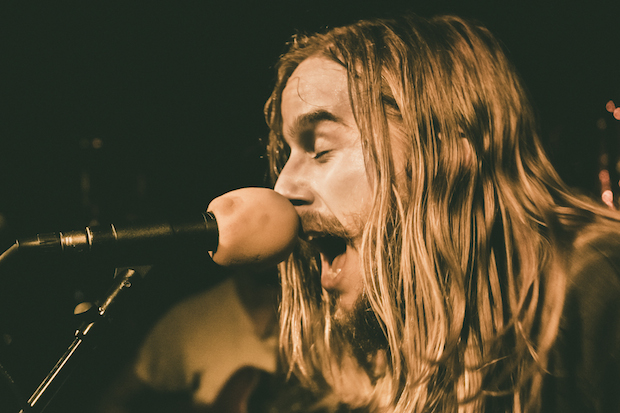 Last Friday, I was ridiculously hungover.  Meeting up with fellow No Country staffers Jacob Ryan and Jake Giles Netter for a rock show on a Thursday night is a sure fire way to get there.  What led to this awesomeness of events?  Ranch Ghost, Cool Ghouls, and Music Band were bringing some rock and roll into our lives at The Stone Fox.

Now, a little over a week later, we sit sans hangover wondering why we don’t do this more.  Check our rundown of the night and some incredible photos by the always talented Jake Giles Netter below.

Music Band plays hard hitting straight up rock and roll that tingles with but far exceeds the playfulness of their most recent recording ‘Live At Wembley’. We came into this show knowing little about them (other than they probably needed our help to be found in a google search), but Cool Ghouls described them upon stepping on stage as “that shit was crazy”. Welcome to Nashville boys! And, a note to those not yet familiar with Music Band, in the week since seeing them we’ve told at least 30 people to put Music Band on their radar, because we’re moving them up on our infinitely long “must-see” list, at least 400 spots.

Cool Ghouls defy logic. In a similar manner to a band like Foxygen, they toy with genres, bouncing freely between surf rock and grunge pop. The only clearly defined sound that is embodied in them is that of the lately blooming San Francisco rock scene (Mikal Cronin, Ty Segall, et al.), if you can call that a clearly defined sound. Or, maybe they are just today’s mid-fi substitute for the missing Pavement in my life. After announcing Nashville as the coolest city yet on this tour, we hope to see more of the previous Music City virgins in the near future. I arrived with this being one of my most anticipated sets of early 2014, and I left fucking convinced.

Ranch Ghost… ah, Ranch Ghost. It is the spoiled Nashville music blogger that gets to compare a band like Ranch Ghost to the comfort of my favorite hoodie. They never cease to amaze, never cease to let up, never cease to surprise. In a set that featured a washboard getting beat to hell, Ranch Ghost put on a show that was fitting for a weekend headlining slot at Mercy…hell, Cannery. Yet, it was just another night for the boys of Ranch Ghost kicking the dust off The Stone Fox.

Stream The New EP 'By The Way You Look' From What Up, English