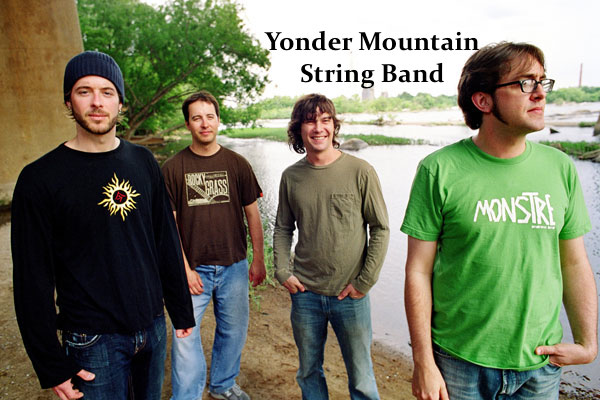 Quick! What’s a band known for their keen live show?

You probably went with Phish or some other jam band, but a select few of you piped up with powerful shouts of “Yonder Mountain String Band.” Oh, how right you are, theoretically participating audience member. Regardless, bluegrass phenomena Yonder Mountain String Band is in fact quite known for their highly improvised and entirely energetic live shows. The band sees more than a hundred shows each year, which has really given the four Colorado natives a chance to perfect their bluegrass-jam-acoustic formula. Don’t believe us? Then why don’t you just head down to Marathon Music Works tonight, 1/24, for the Yonder Mountain show with opener The Travelin’ McCourys. Tickets are only $22.50 if you buy them ahead of time, but remember to show up by the start of the show at 8 pm. Oh yeah, and you must be 18+ to enter. Sorry, kiddos.

Ask any fan, and they’ll tell you that Yonder’s strongest asset is the communication between the band. Having played together since 1998, it’s not hard to imagine that Dave, Jeff, Ben, and Adam can follow each other’s musical moves to the dot. There’s nowhere this ability is showcased better than their live shows, which typically are sweaty, loud, upbeat, drunk, and even fun. Yes, even fun. They pulled that one off easily. Anyways, this is a band you don’t want to miss, so get behind the wheel of your car and make absolutely certain you’re there for this set.

There seems to be a close working relationship between Yonder Mountain and The Travelin’ McCourys (they often wear each other T-shirts), and one listen to the Travellin’ McCourys music makes it obvious why. Both bands represent a modernized version of classic bluegrass traditions, though the Travelin’ McCourys tend to stick more strictly to the precedent. However, don’t let that fool you into thinking the Travelin’ McCourys haven’t carved out their own niche in the bluegrass industry; these guys are doing it like no else. Take a listen below and see what you think.

Yonder Mountain String Band and the Travelin’ McCourys will perform 1/24 at Marathon Music Works. The show is 18+, begins at at 8 pm (doors at 7 pm), and tickets are available for $22.50.