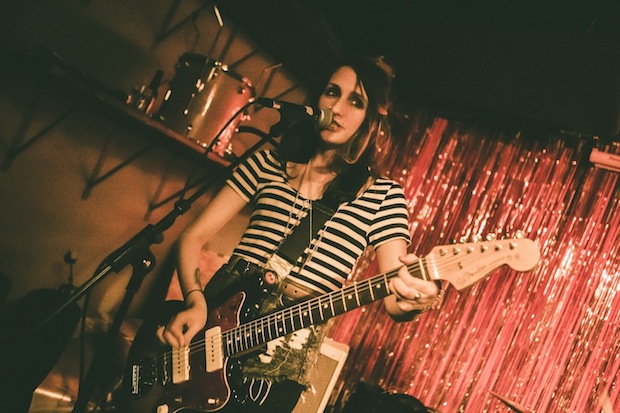 Perhaps it was the fresh linger of Those Darlins‘ Live From The Stone Fox album recording but it was one of those nights when you wish you could leave a show knowing you’ll soon have a vinyl of what you just experienced, ala Third Man Records.

Only in Nashville, can music lovers be given an incredibly intimate experience (so many shows happening = inner crowds) from a band who has received praise from Pitchfork and SPIN to Stereogum and NPR’s First Listen. Speedy Ortiz delivered a murky night of rock with friends Grass Is Green and Nashville’s Gnarwhal and Dogtooth. Check out our full review with amazing photos captured by talented photographer Jake Giles Netter (Life Of Pi) after the jump!

Nashville’s Dogtooth proved they are a band to keep an eye on, opening the evening with driving, powerful drums combined with atmospheric dream-rock and indie shuffle melodies. They set the mood for an evening of “get lost in music.”

Nashville’s Grass Is Green took the stage next. Audience earplugs count: 1. In our preview of the show, we told you Grass Is Green is in the self-proclaimed genre of post-dick wave, and they definitely nailed it however anyone wants to define it. Andy Chervenak kicked off the band’s Vacation Vinny album release show in the shadows of the audience’s left side of the stage. The Boston quartet gave an engaging, high-energy and unpredictable set that featured their song “Vacation 2.0” (Chervenak explained as when you’re back from vacation and needing a second vacation), all while Devin McKnight, Michael Thomas III and Chervenak switched off instruments and stage placements. In between songs, they shared that they had performed the “Thong Song” a capella on a recent night.

Miss Ortiz even showed her love from the front center crowd, dressed in a sleeved hooded cloak. GIG mentioned how they were feeling grimy and at one point shouted “Fuck Kings of Leon!!” before quickly and cheerfully following up with “jk…I understand…I understand…Aha Shake Heartbreak was great though.” The crowd endeared and the jovial vibe continued to end the show with their song, “You’re Yawning All Over My Baby.”

Speedy Ortiz took the stage (sounds like Or-tease from lead singer Sadie Dupuis’ introduction) and jumped straight into songs off of 2013’s Major Arcana. The crowd huddled in as a fog of guitar distortion filled the room and the band took their lovingly-haunting poetic studio sounds to a new live element. Dupuis’ raw vocals twisted “Bang and bang and shoot / What they trained me to do / Windows sweating blood / Choking in on cue / Bang and bang and shoot / How I wanted you like a ghost wants revenge on the living” (Casper 1995).

The mood lightened in between songs as Dupuis amusingly talked about “being a big girl and not peeing yourself” and provided Batman (on The Stone Fox tv) commentary, saying “Can’t do. I got a date with Bruce Wayne.” The climax of the show came during “Plough” as the music intensely scratched at the walls with bellowing lyrics “Stop shaking / Why you freaking the fuck out? / You better stop cause it’s freaking me out / He wants to burn all my candles / But it isn’t for love / He wants a burn on his fingers / But I’m not the one to give it / He wants sulfur and salt and my name on his arm / He wants a burn and it’s freaking me out / He wants to burn…” By the end of the set, the crowd stood breathless, the band sweaty, all wanting more.

Lucky for us, they’re releasing a new EP on February 11th titled Real Hair that we previewed as a 4-track nugget that reveals a new chapter with the same entanglement of enthrallment of their previous art, featuring lyrics such as “someone who sleeps with her neck in reverse.”

Gnarwhal capped off of the night with attention grabbing chaos, showcasing the hardcore scene of Nashville. Their music radiates the desire to play air bass, proven by the audience male who did so, and the need for a good slam dance pit. It was a stellar way to send the evening off and Speedy Ortiz gave their head banging approval from the side stage. Most badass audience punk hair of the night: pink dye job.