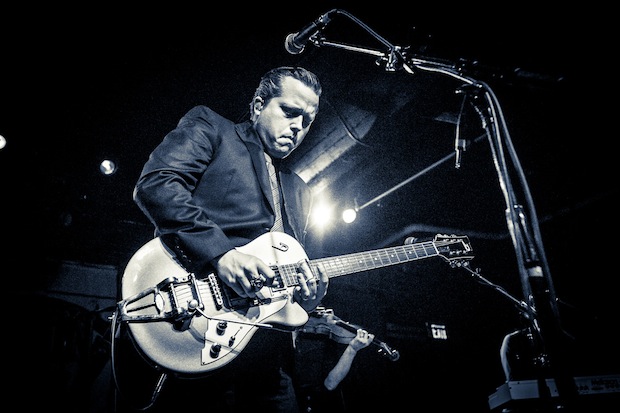 What a night! Odds are you missed out on this epic SOLD OUT show at Mercy Lounge but don’t worry gang. We’ll do our best to at least let you feel like you were there with these words and some amazing pictures from staff photographer Shawn Jackson. In addition to benefitting a good cause, the Salvation Army’s Christmas program, it was the greatest show this writer has seen since I started riding the No Country press-list gravy train.

Studio work is one thing but preforming live is EVERYTHING in this town and Jason Isbell did NOT disappoint. Read on for a full review and photos.

After 8. Late again. When meeting friends for a “few,” why does the last beer always take the longest to order, arrive the slowest and become the hardest to finish? I could hear the music had already started as I jog-walked up the hill and joined the throng lined up to get in. Things kept moving and I was ordering a tallboy in time for Sturgill Simpson’s second or third song.

“This is a song about cheatin’ bitches,” he told a capacity house. I liked him immediately.

He had a four-piece with him and I was drawn in mostly by the peddle steal. Simpson was a great Bluegrass flatpicker and his words/singing reminded me of a younger, less strung out Waylon Jennings. They drew us in with their up-beat Kentucky fried country. They blazed through their well-balanced set and got the hell out of the way, like a good warm-up band should.

Here at No Country, we know all about Jason Isbell’s time with the Drive By Truckers. We know he has an amazing solo album out now (Southeastern) that’s gaining attention and acclaim. We also love that he’s local-ish and sold out Ryman Auditorium earlier this year.  So we also knew, there was no doubt about it, this was going to be one hell of a show.

The 6-piece band, including Isbell’s wife (Amanda Shires) on fiddle, started out with a Trucker’s song “Decoration day” and pretty much never stopped rocking out the whole time. Jason played his souped up electric guitar for most of the show, only switching to acoustic sparingly for slower solos or duets. By the end of it all he had a three-man horn section on stage as well. On the whole, it was much different than what we’ve heard on Southeastern.

Not that we’re complaining. We were thinking chilled out quiet set and we got a full-blown rock ’n’ roll spectacular! Both scenarios are great, depending on the crowd/mood, but everyone seemed to want it louder and as abrasive as possible this night. They closed with my favorite Trucker’s song “Never Gonna Change” and came back for an encore that included a fucking lights cover of The Stones’ “Can’t You Hear Me Knocking?” that had us all jamming in the long wait for a cab.

Find photo evidence of the shenanigans below and next time Isbell roles through your town don’t wait! It WILL sell out and it WILL blow your mind.