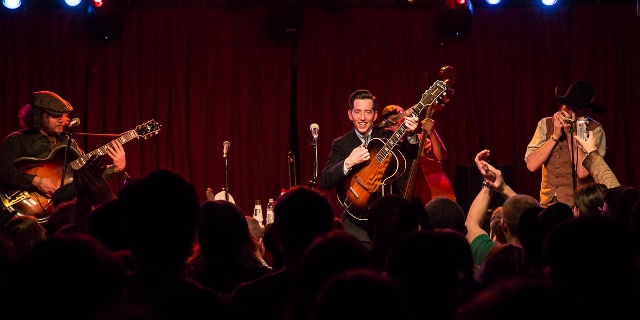 A Wednesday night at the Mercy Lounge. Looking around minutes before the show was to start last Wednesday night at Mercy Lounge, and one thing we noticed was the age range throughout the room. Naturally, the youngest being 18, but there were several older couples happy as could be sitting amongst us youngin’s ready to enjoy the show. To be honest, we weren’t expecting much more than an easy night of bluegrass and root music, but we couldn’t have been more wrong. Bradford Lee Folk & the Bluegrass Playboys along with The Tillers made quite the impression before Pokey LaFarge took the stage with his beaming presence. The night was full of outstanding musicianship and songwriting. We even had a chat with Pokey after the show. Find out what went down, read the interview, and see the great photos from Shawn Jackson after the jump.

Bradford Lee Folk & the Bluegrass Playboys took the stage first. One after one, they all found their places and instruments. The Bluegrass Playboys had all the right ingredients for a bluegrass band: upright bass, guitar, banjo, fiddle, and a mandolin. However, the right ingredients don’t make for much if you don’t know how to put them together, but these guys were incredible. Each of them knew how to rip on their own instruments and incorporate each other as well. After jamming their way through each song, letting each other solo and show their talent, Christian Sedelmyer, the fiddle player, and David Goldberg, the mandolin player, took the spotlight and performed an instrumental Christmas song together to wrap up their set – ‘tis the season! It could not have been a better way to get the show started for the night.

The Tillers are a trio made up of two brothers and one of their friends from Cincinnati. The room was beginning to fill up and everyone was ready to get moving by the time they took the stage. While the Bluegrass Playboys showed everyone how awesome their music and playing skills could be, The Tillers proved it doesn’t take much to wow a crowd. With only a guitar, upright bass, and banjo they kept the ball rolling with a good variety of bluegrass. After playing some pretty similar sounding traditional bluegrass songs, they slowed it down with a riverboat ballad that included a fiddle instead of banjo – which was a different yet still had a bluegrass-y feel. The tempo alternation continued throughout their set keeping the livening crowd on their toes.

After being surprised by the opening acts, we knew Pokey LaFarge was not going to disappoint. This is the first tour Pokey has done since he added to the South City Three. His additions, a clarinet and trumpet player, were absolutely incredible musicians along with the original South City Three. Pokey took the stage with his band and his presence alone was humbling while playing through crowd favorites (“Day After Day”, “Central Time”, “Bow Legged Woman”) and even some covers. For such a large band, they were incredibly tight. They knew their songs and they knew how to play them well. It was awesome to see such musicianship show its stuff. After wrapping up the set, the crowd was not going to stop until they had more. Pokey came back out and played one song solo – “Josephine” (a personal favorite). The rest of the band came back out and ended the encore with “La La Blues.”

Pokey took a minute to explain to the crowd that although the media refers to him as “retro”, that is not accurate at all. He went on further stating that what he plays is American music, he lives and performs in the here and now so what makes that retro? Pokey told the crowd to find the underground music scene and that is where the good musicians are. Find out what else Pokey had to say in our interview with him below:

No Country: Some of your songs talk about being from the Midwest. Where were you raised and did that influence the type of music you write? If it did, how so?

Pokey LaFarge: I was born in Bloomington, Illinois and spent most of my youth there. I think growing up in the Midwest is a big part of my identity as it is for most people who grew up in one region. It certainly plays a role in the lens through which I view the world and what I have to say about it through my songwriting. However, it wasn’t until I left home and started seeing the world, and realizing the differences between it and the Midwest, that where I come from really started to influence me consciously.

NC: Since you write and perform American root music, what other genres besides root music do you pull inspiration from if any?

PL: The term “roots music” has many different facets and understandings…it’s sort of an umbrella term like “Americana”. So I guess you could say that I pull from a variety of traditional styles that, when performed in a contemporary context, are considered American roots music. I play country swing, ragtime blues and traditional jazz, among other styles. I’m also influenced by any music that has soul, music that has clear roots: calypso, varying west African styles, Balkan brass bands, R&B, soul, polka, varying Mexican styles and more.

NC: I love the statement “It’s not retro music. Its American music that never died.” Do you feel in some way that American root music is making a comeback?

PL: Yes, I would say that in particular more young folks are listening to music from earlier days, or at least music that sounds like it’s older. It’s definitely a hip thing be into right now and I think that stems from the fact that’s it’s so different from pop music today; it’s of an act of rebellion and differentiation from mass culture. But a lot of these kids I think are growing into “lifers”. They’re discovering the quality standard of acoustic music and traditional styles.

NC: More than one of your albums have at least in part been recorded or produced in Nashville. What is so desirable about recording in Tennessee?

PL: The people that work out of Nashville are the reason why I’ve been down to record so much. With the last album on Third Man, I worked with Ketch Secor on producing and with Jack and the Third Man folks in the label capacity.

NC: What was it like to go on tour with Jack White in 2012 and what is like to collaborate with him musically?

PL: I was glad to be a part of it, and there were few stand-out moments in my career on that tour…Red Rocks, Radio City and the first time I had played at Cain’s Ballroom in Tulsa, which was something I’d wanted to accomplish for a long time. It was a wonderful opportunity, and collaborating with Jack has been great so far. He brings out a very eclectic group of open minded music fans.

NC: While on the Blunderbuss tour, you performed with the South City Three. Since then you’ve added two band members with the release of your newest record. Did you feel a need to add more musicians or was this something that just happened in the course of time?

PL: It was something in the back of my mind for a while, and so it did happen in the course of time. I’m expanding my sound and with that comes expanding the lineup when we’re out on tour. The new album has more complex instrumentations and the arrangements are a bit more orchestral than in the past, so the horn section made a lot of sense.

NC: With that being said, are there any unique stories of how you met your band members?

PL: The South City Three met me while I was busking on the street in Asheville, NC. Ultimately, they were the reason I moved back to the Midwest.

NC: You not only had a song in the original score of the Disney movie, The Lone Ranger, but you got to be on screen as well. Tell us about that.

PL: Well, this was a first and a unique opportunity. It’s something I look forward to doing more of in the future.

NC: Was recording and performing music something you always had wanted to do or was there another career choice before this?

PL: I was thinking I’d pursue being a historian for a while when I was younger, which in a way I suppose I am. But by the time I was a teenager I knew I’d be playing music for the rest of my life and hoped it would turn into a way to sustain myself and make a living. I’m lucky enough today to say that it has.

NC: When you are in Nashville, do you have a favorite thing you like to do here or place to eat?

PL: When it comes to restaurants in Nashville, there are so many good ones. I enjoy Prince’s Hot Chicken and Loveless Cafe quite a bit.

NC: Lastly, what does 2014 hold for Pokey LaFarge?

PL: We’re taking our first trip over to Australia and New Zealand in March, playing a couple big folk festivals as well as some more traditional club gigs. We’ll be touring the states a bit as well and likely touring Europe again. I’m also hoping to really zone in to the new material I’m working on and start thinking about the next album more concretely.