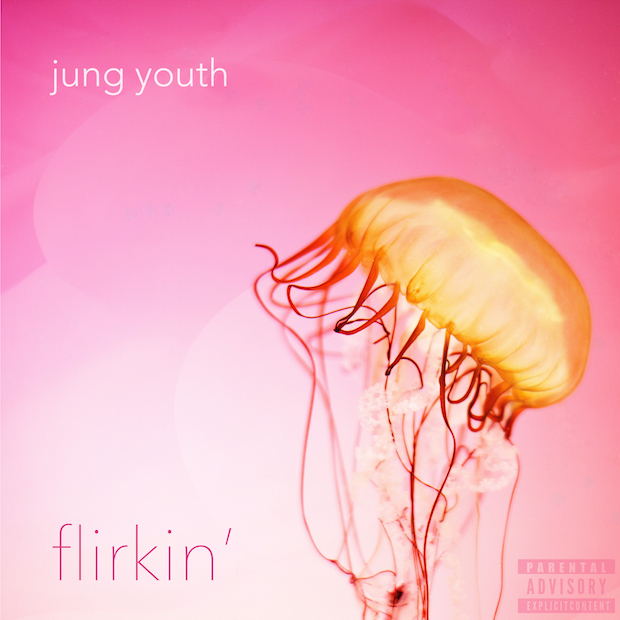 Before local hip hop artist Jung Youth plays Mercy Lounge tonight for 8 off 8th: The Jingle Ball, we had a chance to sit down with him to discuss his newest EP, Flirkin’.

No Country: I know you as Justin Donahue. Who is Jung Youth, and how did he emerge?

Jung Youth: Jung Youth is for the seekers, for anyone who wants to push the boundaries of what they know and would not prefer to live with an “ignorance is bliss” mentality. Aside from the connection to Carl Jung, JUNG is an acronym that stands for “Justice Under New Gods.” Especially in modern times, there are tons of ‘new gods’ that we are being told to idolize everywhere we look—Kanye even has that song “I am a God.” What I want to do with my music is provide a navigational foundation for people who don’t want to worship that stuff. Jung Youth is like my version of the Wu-Tang Clan or Odd Future or N.E.R.D. or UGK, or on an even broader scale, how Lady Gaga has her Little Monsters. I may be the artist and founder behind Jung Youth, but it’s something way bigger than Justin Donahue himself.

NC: What does “flirkin’” mean?

JY: Flirkin’ is flirting while you’re working. I think we can all relate to that a little bit. It’s like when you’re at a store and one of the employees is ‘giving you the eyes’ and trying to do a little bit more than just their job.

NC: Flirkin’ is a stream-of-consciousness album that focuses on a protagonist seeking and undergoing personal transformation. Are you the protagonist? What inspired this concept?

JY: I don’t want to go as far as to say that we are all the protagonist, but it was definitely my intent to create something that would fit into a modern “everyman” paradigm. And of course, I used myself and my life as main inspirations. The project is meant to be played from start to finish, and the songs are like chapters. So if you think about it like that, you will see that the first three songs are setting the stage for the next three songs, and then the last song, “Departure” is like the climax.

NC: What song on this album defines you most as an artist?

JY: “Departure.” Those are some of my favorite lines—they really encompass my philosophy, especially “What is love if you don’t share it? [And] life if you don’t live it? If I could have it all, then I would never waste a minute.”  I’ll never forget writing and recording that song, and how I felt when Jordan first played that beat for me. I even rapped it a cappella for my great aunt, who is a nun, at a family reunion. She liked it, so I knew I was on to something.

NC: You worked primarily with a producer on this, Nephew. What is the extent of your partnership?

JY: Nephew is my Kentucky cousin, Jordan Bartlett. That’s the homie. We met one night at a party when I was first considering moving to Nashville from Kentucky. I ended up freestyling for an hour with Classic Williams. He claims that from that day on, he began setting aside beats he wanted me to rap on, though he didn’t show them to me for another year (after I had proven my talents as an emcee).

NC: Actually, the first time I met you, it was in a freestyle circle at the Cherub house. Is this part of your writing process?

JY: I think there is a time and place for both freestyling and writing. For example, I absolutely love freestyling when I’m in my car on long drives—but I also used to write all the time while I was riding the subway from Queens to Manhattan. My process for this EP was a mixture of both.

NC: You’re playing Dec. 16 at Mercy Lounge for 8 off 8th: Jingle Ball. How will this sound be performed live? What are your feelings?

JY: I wanted to go with a full band. Some songs will sound different than the studio recordings, simply because we’ve tweaked the arrangements and instrumentation. Tracy Champion is going to be performing with me live, both as a vocalist and also as a member of the Jung Youth band, and we even have a couple things up our sleeve that I am very excited about. This is the first time any of these songs will be performed live.

NC: The hip hop community is largely underrepresented in Nashville. What can you say about it?

JY: I can say there are a lot of super talented hip hop artists in Nashville, and I am proud to be a part of such a rapidly advancing scene. Over the next few years I think Nashville will get a lot of attention as a city where hip hop is alive and well. Take, for example, John Gotty, the founder and editor of hip hop site The Smoking Section. He and others like BreakOnACloud and 2L’s on a Cloud, and Nashville Scene as well, do a lot for spreading awareness and communicating what’s going on locally with hip hop. But I think a lot of it is up to the fans and artists.

NC: What’s the future look like for Jung Youth?

JY: The future looks very busy and bright. After having released a few projects over the last couple of years (Four Seasons, Duende, and now Flirkin’), I’m heading into the studio in January to finish mixing/mastering my debut full-length album as JustinDonahue. We did that with the full band and it’s going to be HUGE. In addition to that, there is a follow-up to Flirkin’ in the works with Nephew as well as a project with Tracy Champion. Also, Dannny Melon and I created a group called Woaser Kids, and we are working on getting that EP out in 2014 as well. And I can’t forget about Yada Yada, my full-length, ultra-grimy hip hop project with Central Parks that is going to blow some speakers for sure.