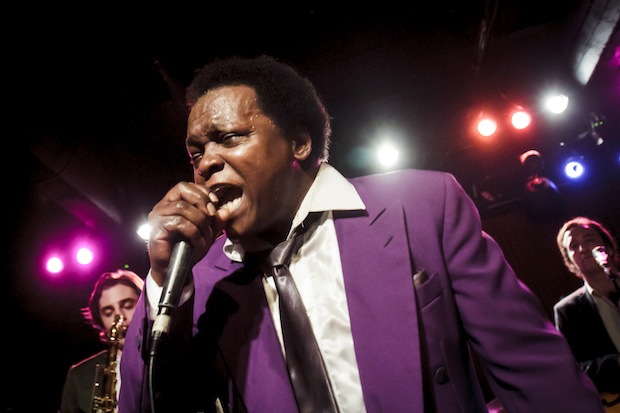 When was the last time you had a hot injection of funk, R&B or soul? If you were at Mercy Lounge last week for Lee Fields and The Expressions you can consider yourself vaccinated for all three, but, if you missed the show, odds are your groove is deficient. In a town that rarely dances (see this post) everyone seemed to be gettin’ it on that night. Local soul diva Alanna Royale got the party started and it was all good to the very last drop. Before you curse yourself for not being there, read on to find out what you missed and check out our amazing photos below …

Sometimes it takes some funk to get out of a funk. The typical day-job midweek hump was really getting to me and my writing was at an impass. No Country needed posts on deadline but I couldn’t find inspiration to save my life. Usually a little weed and a couple beers is all that is needed but on this day in particular it was just not flowing. At times like these, one just has to step away from the glowing screen and keyboard for awhile.

Luckily, Alanna Royale was primed to be the first of two wonderful distractions. Her 6-piece band, including the Nashville Horns, is Berklee trained and hella talented. Her smokey, soulfully singed voice is equal parts Tina Turner and Adele with a touch of Emmylou Harris for good measure. Like any great diva, she had sass to spare and it didn’t stop when her singing did. She got the masses to boo her friend Anthony who was in the crowd but rarely makes shows. A friend of No Country, Royale also called out my editor (who was in attendance) and his  “two bit paparazzi blog” but we know she was just kidding … right? Never above self deprecation, she told a story about how she was the “best fucking waitress in Nashville” and played my favorite song of her set “Tennessee Heat”.

Before long it was time for Lee Fields and his touring band The Expressions. They were in Nashville to promote their latest album Faithful Man but Lee is no johnny-come-lately. He’s been puttin’ his thang down since 1965 when he toured with some of the top R&B acts of the day. He’s been going strong for 45 years and shows no signs of stopping. When I say this was the closest I’ve ever been to seeing James Brown in person that’s not an over-statement. This guy is a showman first and foremost.

His 7-piece band played a funky grand introduction before the man of the hour came out to thunderous appluase. He was in a Joker (of Batman fame) purple suite and gray silk tie with matching pocket handkerchief. He had most of us dancing from start to finish, working the crowd and singling out some sexy ladies, assuring them that he knew their men were satisfied. The highlights for me were “I Still Got It” and the heartfelt “Wish You Were Here” which Lee explained reminds him of his father who has passed. But he didn’t slow it down for long. He was a whirling dervish on stage with dance moves for days and dripping with perspiration. For the encore, he was down to just a black silk vest and no undershirt, gold chain swaying as he bopped from left to right, the crowd waving it’s hands side to side in unison.

They jammed out for what seemed like hours and never let up. The crowd had worked itself into a euphoric delirium and none of us wanted it to end. Afterwards he went to the merch table to shake hands and sign autographs. I gave him some dap and thanked him and his soul flavored funk for getting me out of my rut. I couldn’t get home fast enough to work on my posts. It was obvious my groove would be in great shape for months to come.