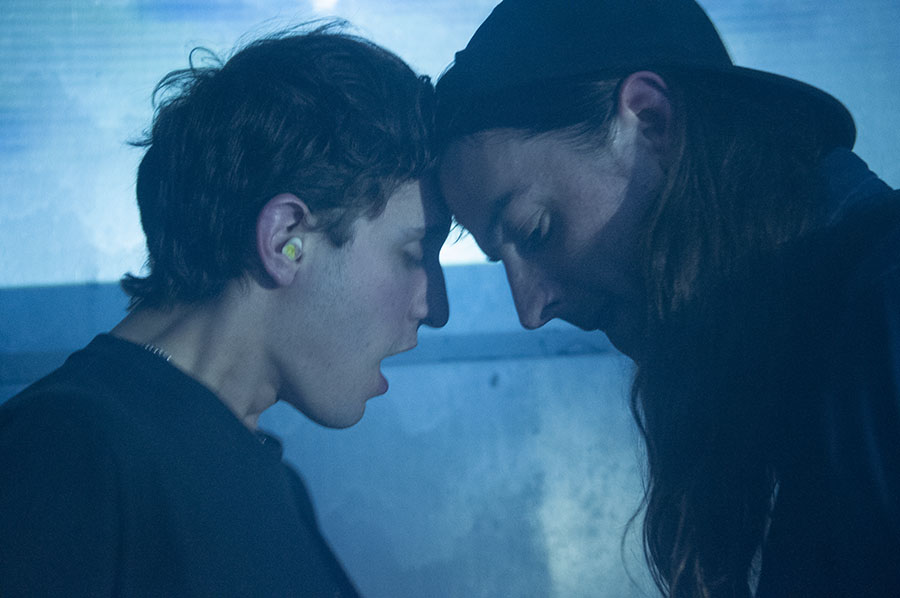 Tucked away in East Nashville behind Hair World lies a gigantic warehouse labeled as The Bohéme Collectif. We were anxious to see how this art gallery will transform for lo-fi, psych bands R∆chel, Sol Cat, Beach Fossils and Penicillin Baby.

We walked into the venue, mostly known for being an art gallery, to find that in reality the space is anything but large. Couches were squished together with several pieces of art on the wall. There was some contained confusion as to where the music would be. We quickly heard the kick drum vibrating upstairs. Running up the narrow stairs induced flashbacks of various basement shows, something that’s grown prevalent around Nashville. With a BYOB announcement, the low dim of a projection screen, and familiar bodies from local bands, this art gallery had achieved classic house party status.

First up was R∆chel (that’s an alt-j for the A), this band is always performing at house shows. Sadly, we only caught the tail end of their last two songs. From what we gathered they are the definition of DIY  don’t – give – a – F*%& type of music. Their sound was chaotic and messy which was hard to depict the hook between the guitar and the synthesizer. From the pause between the two songs, lead singer, Robbie Plackmeier, was spewing about a recent Netflix movie they watched called “The Sound of Insects.” The explanation was random and will most likely be on any zoned-out fans list of “must watch while being fried,” list.

Up next is just about everyone’s favorite local band – Sol Cat. Their presence is strong and fluid while they performed. No wonder they were heavily buzzed about during the CMJ Music Conference. The room was extremely crowded for Sol Cat, we took fort in the front to take photos, but we were immediately pushed right into lead singer, Brett Hammann’s face as he started the first song. Once the smoke machines rolled in, Hammann seduced the crowd into a dream-like performance, which seems like he has a knack to do. Not to mention their catchy lo-fi mixture seems to have everyone in the room move at least one piece of their body. We were gladly welcomed by some new songs they created during the past couple of weeks. Which makes us stoked for what they have in store for us in the future.

Even if Beach Fossils were not technically the headliners, they sure packed a punch to the overly crowded loft at The Bohéme Collectif. While Sol Cat started the dream-like vibe into the room, Beach Fossils tromped that definition and kicked everyone into a hypnotic, psychedelic mosh party. Beach Fossils’ live set is completely different than their recorded work. Such as, if you throw them on your record player, they are perfect for those complete chill out days on your couch. However, during their live set – like this one – it’s the complete opposite. It’s packed full of energy. With the crowd face to face with the band, this performance was most intimate show we’ve ever been to. People were crashing, diving, and surfing. The crowd was so rowdy, the  bass player spontaneously jumped into the crowd causing the tallest mosher in the room to fall head first into the drum kit and knocking over one of the mic stands. The projector screen placed over their head started to play random colors and negative-film-like shapes on the wall. If you were one of the zoned out members in the crowd, this moment was a trip. This gave us the overwhelming image of who Beach Fossils’ is and we crave more.

Last on the bill for the night was Penicillin Baby. Sadly the loft cleared out from die-hard fans of Beach Fossils. But, those that missed Penicillin Baby were sadly misinformed. Sol Cat and Beach Fossils created a relaxed, lo-fi, psychedelic sound while Penicillin Baby took that sound and cranked it up a few notches with heavy guitar riffs and solos. A few members in the front were dancing and singing along to every song. As an avid listener of Ceremony, we heard a lot of similarities from Ceremony’s new album Zoo. We don’t blame them, blending punk with lo-fi is a match made in heaven.

Hopefully The Bohéme Collectif has more shows like this in the near future. It was an experience that most Nashvillians should have.