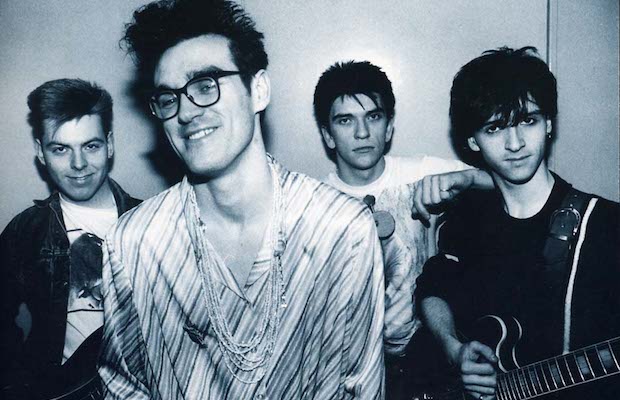 In honor of our love for all things Marr, we’re going to be bringing you some special Johnny Marr-related coverage all week long, starting with a look back at his band that started it all: THE SMITHS. After the jump, revisit a bit of Johnny’s history!

Formed in 1982 in Machester, The Smiths are perhaps the best-known and most acclaimed band in British history, next to The Beatles. Not a bad feat for a group who only managed to last five years and four albums. Though they never quite reached the godlike status stateside that they did in their native UK, The Smiths finally made a significant splash in the U.S. with their third and most commercially-friendly release, The Queen Is Dead.

Known for their fusion of post punk, dance music, rock and roll, and pop, The Smiths won fans over with their juxtaposition of bright, accessible compositions and moody, socially-charged, and, often, sad and depressed themes. Visually-minded, punk influenced, and years ahead of their time, the band created a movement that influences artists to this day, and connects with fans on a deeper emotional level than most bands could ever hope to in an entire career.

Just 19 when The Smiths began, Marr formed an immediate bond with frontman Morrissey, and the two became the core songwriting team of the group. By 1987, the relationship between the pair had grown strained, a topic which, to this day, fans debate the specific cause of. Regardless, Marr left the band, ultimately leading to The Smiths’ demise.

Though Morrissey more or less continued on the stylistic trajectory that The Smiths had laid out, Marr chose to subsequently explore lending his unique guitar style to various other groups, never quite replicating the sound or success of the band that made him famous. On his latest (and first true solo) release, The Messenger, Johnny has finally managed to recapture much of the spark, sound, and atmosphere of the early days. Though Moz has been playing Smiths songs as part of his live performance for years, Marr only recently began reincorporating some of the classic tracks into his live show. Expect to hear a Smiths tune or two this weekend. Let’s be real, The Smiths will never reunite. But Marr is a living legend, and you don’t want to miss him.