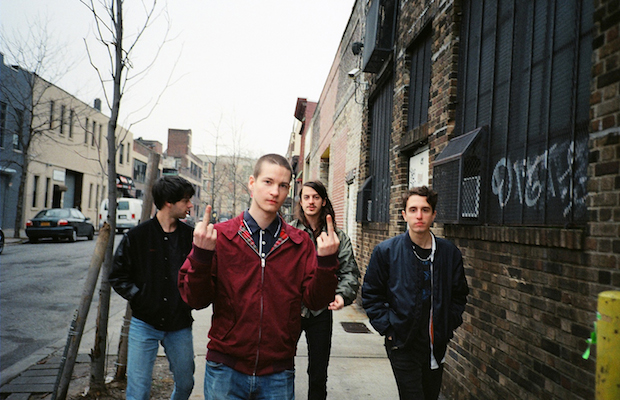 What’s that, you’re not content with tonight’s show offerings of Lee Fields and Kevin Devine? You’re looking for something a little more lo-fi and/or garage rock and/or psychedelic? You prefer your shows in nontraditional, DIY spaces? Well, buddy, we’ve got just the thing for you. Brooklyn indie rockers Beach Fossils will be invading The Bohéme Collectif tonight, with a talented local supporting lineup of Sol Cat, Penicillin Baby, and Rachel. Sound like your cup of tea? You’d better show up early, because this one will be packed! Look for some post-show coverage from us later this week, and keep reading for a preview of tonight’s lineup!

Brooklyn’s Beach Fossils has, over the years, spun off bands like DIIV and Heavenly Beat. It’s the Dustin Payseur-helmed original project, though, that still possess an uncanny knack for crafting dense, atmospheric, lo-fi indie rock compositions, bordering on moody, ethereal dream pop. Their latest, Clash the Truth, is one of this year’s best releases. We’d recommend these guys no matter where they were playing, but the fact that tonight’s show is at Bohéme makes it unmissable.

By now you almost certainly now and love local garage rockers Sol Cat as much as we do. With a killer new EP, Welcome to Cowabunga, under their belts, a buzzed-about recent trip to CMJ, and hype building by the day, one of our favorite bands in town seem well on their way to becoming everyone’s favorite band in every town sooner rather than later. They’re the most fun when they’re in communal spots like this one!

Does it seem like Penicillin Baby have been playing at least once a week lately? Well, they have. Do you know why? Because when you’re as good a band as these psyched-out, local garage rockers, everyone wants to perform with you. Whether they’re opening for Tristen, jumping on Psych Night, or closing a DIY show, they’re an unbeatable (and underrated) force to be reckoned with.

Local lo-fi indie/emo/art rockers Rachel will kick things off. Their laid back, chilled out, experimental sound is sure to emotionally resonate, and to set the pace for a great night. Fun fact: they are literally impossible to Google. Show up early!

Beach Fossils, Sol Cat, Penicillin Baby, and Rachel will perform TONIGHT at The Bohéme Collectif (919 Gallatin Ave, Space 8). Things kick off around 9 p.m., it’ll cost you $8, and, though no age policy is posted, since it’s BYOB, we’d expect it’s not suitable for young’ns.