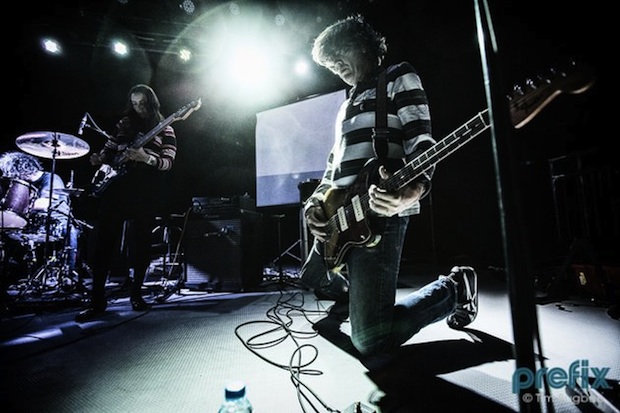 We caught one component of Sonic Youth several weeks ago and told you all about it, now we are frothing at the mouth for another piece of the puzzle that’s rolling into town TONIGHT at Exit/ In. Thurston Moore’s latest project post Youth’s defunct reunion is Chelsea Light Moving and if you like your amplification on steroids and your guitars bloated with distortion than you need to be at this show. Opener William Tyler will floor you with his beautifully intricate and technical finger picking (the man is a maestro) so don’t miss a thing! Doors open at 8, get tickets here and be sure to read on to be the most informed person there …

Still in it’s infancy, the band formed in New York in 2012 and is touring in support of their self titled debut album on Matador Records. Moore is the driving force, writing most of the songs and playing his trade-marked hyper effect riddled experimental guitar. The record is a little more politically charged and a bit of a departure from the more easy going Youth days but it rocks just the same! Check out the video for the first single below.

A native son of Nash, Tyler also played in Silver Jews (a favorite of indie aficionados) and Lambchop, but his solo instrumental sounds have little to do with that association. Now that he’s struck out on his own, he’s known for his epic finger picking style and insanely technical skills. He latest release is entitled Impossible Truth under the reputable indie label Merge and is the perfect background for nearly anything. Space out to the wordless wonders he plucks out on strings below.