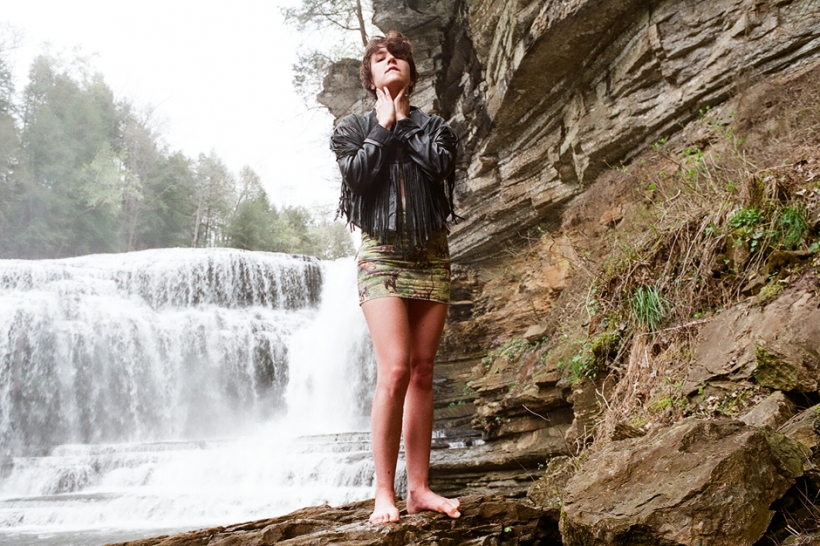 Tristen is way more than just another Nashville-based folksy singer/songwriter. Accurately dubbed a “synth-pop siren” by Spin Magazine (who also have a live stream of her new record on their site) the mesmerizing Tristen channels influences from Kate Bush to Henry Rollins in her sophomore effort, which is quite a departure from her first record. The official release show for her new album CAVES is this Friday, November 1st at The Stone Fox w/ Meadownoise & Pencillin Baby, and we’ve got a pair of tickets to give to one lucky winner! Find out how you can win, and check out some tracks from all the bands playing that night after the jump.

We were massive fans of Tristen’s first label release Charlatans At The Gate back in 2011.  As we mentioned before, CAVES takes a pretty drastic turn into synth pop, and that had us standing in line on Record Store Day at The Groove last spring to catch our first glimpse of the new sound.  She puts on an incredible live show, and we know she’ll bring her A-game to Nashville this Friday at the Stone Fox.  Check out her upbeat, 80’s-tinged new single, “No One’s Gonna Know” from Caves below.

Meadownoise is the side-project of multi-instrumentalist Matt Glassmeyer, perhaps best known for playing winds with the Nashville-based band Lambchop. It’s been a quiet summer for Meadownoise, but we jump at most chances to catch their shows.  Check out “Mousey” below to get an idea of why.

Four piece psych-rock band Penicillin Baby have only been a band for a couple of years, but have released a ton of tunes already, including 3 EPs in 2012! Their next album will be released  by one of our favorite indie labels, Jeffrey Drag Records, so expect to hear more info about that soon. Check out their latest track, presented by HOY POLOY: Penicillin Baby performing LIVE at the Old Paint Factory in Nashville.

Must be 18 to enter, per the show’s age requirements. Winner will be announced Thursday, October 31 at noon, and will receive 2 tickets. For a bonus chance to win, RSVP to the event here, and share it on your Facebook wall. Enter below (you will be redirected to your e-mail, where you will need to hit send):

If you’re having issues with the above form, you can alternately send your full name in an e-mail to [email protected] with “Tristen Giveaway” in the subject line, and please let us know if you shared on Facebook.

Tristen, Meadownoise, and Penicillin Baby will perform Friday, November 1st at The Stone Fox. The show is 18+, begins at at 9pm, and tickets are available to purchase for $10.

[PREVIEW] Tonight Alive, The Downtown Fiction, For The Foxes, & Echosmtih | TONIGHT @ The End