[PREVIEW] Tonight Alive, The Downtown Fiction, For The Foxes, & Echosmtih | TONIGHT @ The End 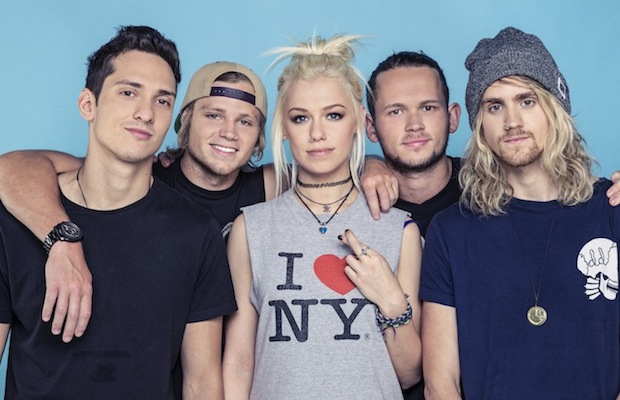 We often tell you about various punk and pop punk shows. Though that scene and its many offshoots and subgenres is fairly diverse in its own right, more often than not, the pop punk-related tours that pass through contain several bands who ultimately sound fairly similar in style. That is not the case for tonight‘s show at The End, however. Representing four very different, refreshingly unique takes on their respective styles (and only loosely related by some aesthetic commonalities and a shared Warped Tour history), Australian pop punk alt/rock act Tonight Alive, power pop/pop rockers The Downtown Fiction, indie rockers For the Foxes, and breakout indie pop group Echosmith represent one of the most exciting, diverse, and fun lineups of the entire week. If you’re not as familiar with the scene that these bands sprung out of, this show is a wonderfully accessible jumping off point- so give them all a listen! After the jump, find out more about all four bands.

Hailing from Australia, Tonight Alive channel an aggressive, anthemic pop punk-informed sound that has allowed them to tour with a broad range of acts, from hardcore to pure pop, and has earned them fans from all subsets of the scene. Frontwoman Jenna McDougall is perhaps the most engaging and stadium-primed female vocalist to emerge in pop punk since Paramore’s Hayley Williams, but the two group’s similarities only run surface deep. Though they’re not exactly treading new ground, Tonight Alive do what they do very, very well, continuously innovating within a space that often feels over-saturated. Their latest, The Other Side, is stuffed with energy, aggression, top-notch sing-alongs, and, most importantly, refined, engaging songwriting. We’re not sure if The End can contain their over-the-top stage show, but we encourage you to come find out.

More conventionally pop rock, but influenced by the pop punk scene, Virginia’s The Downtown Fiction would be a good “guilty pleasure” band, only their songs are so damn good (and so damn catchy) that there’s nothing to feel guilty about. It’s been a couple of years since the group cranked out a proper release but, after recently signing to Fearless Records, they’re expected to finally drop a new album early next year. With huge hooks and melodies so sweet they run the risk of rotting your teeth, The Downtown Fiction are one of the most fun (and, arguably, underrated) pop acts around, and a real treat to catch live.

For the Foxes inexplicably exist in the Warped Tour, pop punk world, but the New Jersey indie rockers possess a sound that is much more progressive and transcendent than many of their peers. Channeling elements of dance pop, synth rock, and post-punk, with a clear affinity for ’80s pop, For the Foxes are some of the best songwriters making music right now, period. It seems like only a matter of time until this group explodes (and, if there were any musical justice in the world, it would have already happened by now), but, lucky for you, you can catch them in an intimate setting like The End in the meantime.

Only an opening act in the literal sense, California family act Echosmith are on the verge of being breakout stars- and would be worth the price of admission for this concert alone. The (mostly still) teens stole the show (and the admiration of their tourmates) all summer long on Warped Tour, with their infectious wise-beyond-their-years take on indie pop. Their newly released debut album, Talking Dreams, is one of the best records of the fall, and a scary indicator of the even bigger things we can expect from Echosmith in the coming years. Reinforced by young frontwoman Sydney Sierota’s natural charisma and unparalleled technical prowess, the group’s live show is unreal, especially for such a new, young band. Do whatever you need to do to show up early, because every single band on this bill deserves your attention.

Tonight Alive, The Downtown Fiction, For the Foxes and Echosmith will perform TONIGHT at The End. The show is All Ages, begins at at 7 p.m., and tickets are available for $12 online or $14 at the door.

Listen to No Country Take Over Lightning 100 To Premeire 12 New Local Songs!