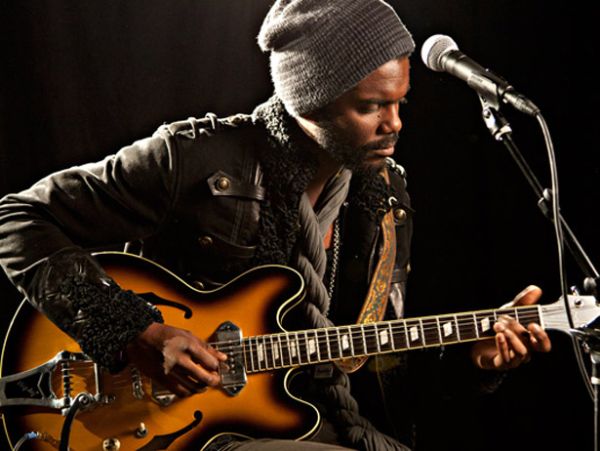 A few weeks ago we told you Gary Clark Jr. was coming to Marathon Music Works to melt skulls with his amazing guitar skills and soulful vocals and even offered you a set of free tickets. Some of you were there and left with your brains liquified, but the rest of you missed out on one of the best shows this writer has ever seen … no bullshitting! Did I mention it was on a Tuesday night? Not every show that shines happens on the weekend my friends. Throw in warm-up Warren Hood and several tokes on a fat jay from a like minded, anonymous, clean looking gentleman in the parking lot, and  it was a baked night to half-remember. Thank God for notes!

After saying goodbye to the guy, who initially I’d started a very casual conversation when he’d asked for a light (he sparked the dope without hesitation like he’d known me for years), I walked down the street to the venue super duper high. After checking in and making my way to the bar I was captivated by Warren Hood and his Rock ‘n’ Roll backing band. His furious fiddlin’ was also something to behold. They started with a up-tempo one called “Alright” that immediately went on my “T0 Download List,” that’s still waiting to be purged. The five-piece band had a little bit of everything and the female vocalist Emily Gimble‘s powerful voice was a very complementary to Warren’s laid-back crooner singing style. The harmony on “Whistle Blow” was also very impressive and worth a DL.

During the intermission I pondered my next move. The first beer did not go down smooth at all and I doubted if I could muster the strength for a second. I’d partied my ass off the night before at Motown Monday and worked my day-job in the morning.  The herb helped a little but I still had that not-so-fresh hung-over film on my skin that I’d sweated out after my morning shower. I gave away a shot of Jack I had to buy to meet bar minimum, and closed my tab while mentally patting myself on the back for being so generous.

Gary Clark Jr. was even better than advertised. From the moment he walked onto stage it was obvious that he meant business. The four man group got going with “Give it Up” off his new album Blak and Blu and jammed it out for an extra 10 minutes longer than the track’s album length. This theme would be revisited again and again, much to everyone’s approval. Gary wasn’t the only one who could shred either. His back-up guitarist Eric Zapata, a.k.a. King Zapata, pulled out a double-necked, half 12-string half 6-string, to tear it up a little of his own during one of my favorite tracks “Don’t Owe You a Thang.” They slowed it down about halfway through so people could make a beer run and then picked right back up. The crowd was a very unique mix of college-aged kids, late twenty-somethings and forty year old, paunchy white men. Gary has a huge following with Stevie Ray Vaughan and old-school Texas Blues fans.

Gary was also much taller than I imagined, dwarfing a woman I saw him take a picture with before his set when he was mingling on the smokers patio. Of course the thing that sticks with me more than his stature is his mind blowing guitar playing. He was easily THE BEST guitar player I have ever seen live and in person. That is coming from a 3-time Bonnaroovian and a life long music fan who has seen countless other shows too various to mention. I’m trying to make a living writing about music, so I hope I have some kind of clout! There was very little banter or talking to the crowd in-between his songs. He kept it simple and let his skills do the talking. At one point, he had his pedal-effect ridden guitar making animal sounds while he made faces that looked like he may climax in his pants. He worked one side of the crowd and than they other never breaking stride with his continuous solos. Even the drummer and bassist had there own little unaccompanied jam sesh at one point. He closed out with his biggest single to date, “Bright Lights,” and later came out for an encore, doing two songs all by himself, the crowd respecting the quieter arrangement. Goosebumps. The band came out for two more to finish up the encore and “Numb” was probably my favorite song performance of the evening. Overall a phenomenal two and a half hours and one hell of a Tuesday night.

Think this piece is all fluff and I’m blowing too much smoke up Gary Clark Jr.‘s ass? Before you start in on me, go see him live and tell me you don’t feel pretty damn close to the same way I do. Also, be sure to cop his new album and the prior EP here. Trust me; do these things that I ask of  you and you’ll be saying “Hail, Hail, GCJ!” too.