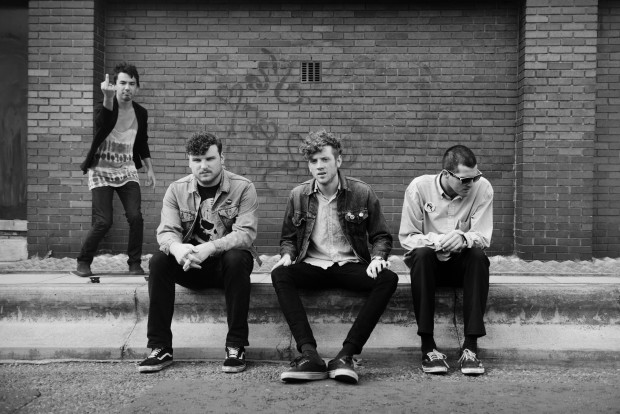 We told you about Burgerama, the caravan of Burger Records artists that melted faces at Mercy Lounge last week.  For those of you that missed out, you have another shot to catch some of the awesomeness that comes along with the tag of premium punk label.  Tonight, FIDLAR and The Orwells join forces with locals The Kingston Springs and Bully over at Exit/In.  We have a preview of the event below, but, before you even get there, grab those tickets here.  We’ll see you later on tonight?

FIDLAR stands for Fuck It Dog, Life’s A Risk, and their music takes that same attitude.  We had the chance to catch their recent set at Mercy Lounge opening for Waaves, and it was insane.  Minus the fact the we fully expected to be doused in PBR during when they opened with their appropriately fitting hit song “Cheap Beer”… alas we were stymied by an all ages show that required beer be kept in the back room.  Needless to say, that won’t happen at Exit/In tonight, and we’re beyond stoked to be required to wash our skinny jeans from beer soakage on Tuesday morning.  Check out “Cheap Beer” below to get ready for the madness.

The Orwells aren’t even supposed to know what cheap beer tastes like. This crew of Chicago punks earned their chops after getting recognized by Los Angeles blog Aquarium Drunkard… yes, those are the same dudes that brought Alabama Shakes to the world. While they are worlds away from The Shakes, they are the perfect opener for FIDLAR. We had the chance to catch them as an early opener for Freakin’ Weekend back in the spring, and, while Diarrhea Planet and JEFF owned the night, The Orwells were right in the zone for the evening. You can check out their breakthrough hit “Mallrats (La La La)” below.

Local indie rock heroes The Kingston Springs may not bring the same punk-tinged flair as FIDLAR or The Orwells, but they’ve got plenty of live energy and enough rock and roll attitude to carry their own. We’ll likely end up with one of the more lively sets we’ve heard from the versatile rockers. We told you about our love for their debut self-titled record last October, and you can check out the hit “Weight Of The World” from that release below.

Pop-punk inspired indie rockers Bully get things started. These locals have been appearing on more and more bills lately, though this writer personally hasn’t seen them yet, but the word on the street is that you won’t want to be late and miss them. Check out their EP below to see what everyone is talking about.