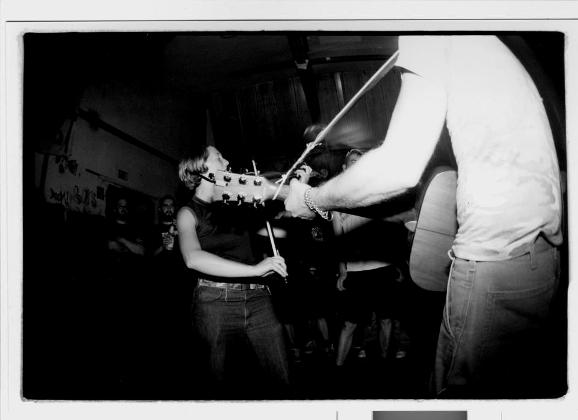 Bloomington’s Ghost Mice have been playing emotionally and politically charged true-to-acoustic DIY folk without amps and equipment since 2003. We got got a brief history lesson as they introduced their song “John and Jodi” regarding John Hinckley’s attempted assassination of Reagan in the name of crazed fan-love for Jodi Foster. I want to be loved the way John loves Jodi, too.

Another Bloomington folk punk, Garrett Walters began her one-woman set in 2011. Her poignant, brutally simple lyrics make you want to cry and laugh at how much you hate yourself, too.

Local folk punk Geronimo Jones may not have the most quality recording the internet has to offer, so keep an eye out for the next time he’ll be playing this wonderful city.

On the total opposite end of the folk rock spectrum are ambient locals Elk. Last night was their first show, and they nailed it right on the head. This five piece band’s instrumentals are as complex as they are mellow. A round of applause for singer Brandon Salaway’s killer pitch and Roger Ross’ intricate percussion. We look forward to hearing what else they got.