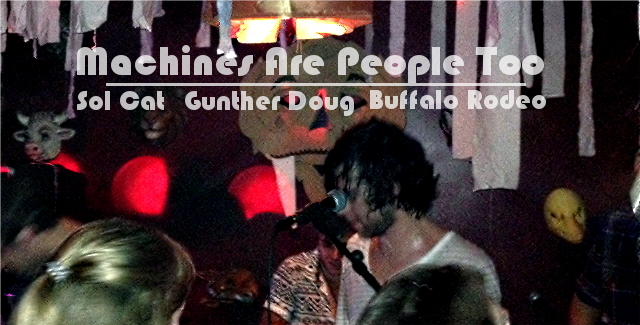 Last night, Nashvillians from all over congregated 318 Elberta Street to see Sol Cat, Gunther Doug, Buffalo Rodeo, and an unannounced surprise headliner. Perhaps it was due to the surprise headliner, or even the appropriately psychedelic decorations littering the house, but for whatever reason the collective atmosphere at the party was one of anticipation, excitement, and most all, enthusiasm. Music City mingled for about an hour after the doors opened, smoking cigarettes next to the backyard hot dog stand, until Buffalo Rodeo began their set around 9.

Unfortunately for readers unfamiliar with Buffalo Rodeo, they’re one of those bands that are tough to pigeonhole under a specific genre or label, but we’re going to go ahead and try. The Bowling Green, Kentucky natives combine traditional indie rock vocals and guitars with heavily textured ambient influences, prominent drum lines, and just a dash of that prog rock mentality, though even that stroll down adjective lane does not do the band’s sound justice.

Regardless of what classification is applied to Buffalo Rodeo, one thing is for sure: their set kicked ass. All of the shows took place in a cramped room upstairs, which may have been rather hot and uncomfortable but was unquestionably intimate. This intimacy augmented Buffalo Rodeo’s set; as fans crammed up the stairs and into the room, the band grew more excited and played more energetically, which drew more fans, and so on. All in all, this feedback loop helped to introduce many Nashvillians to a stellar new act. Buffalo Rodeo came out with a new EP last april, which you can get via their Bandcamp.

Up next was Gunther Doug, one of Nashville’s finest new acts. The three piece would be described best as vigorous. Their sound is a mashup of grooving bass lines, punchy drums, surf punk guitar, and wailing vocals. You know when your friend wants to show you some band you’ve never heard of, and they end up being awesome? That’s Gunther Doug. They’re talented and play memorable tunes but manage not to take themselves too seriously. Gunther Doug would be at home with the likes of Diarrhea Planet.

Currently, Gunther Doug have two singles out, both of which can be downloaded for free (or a small donation if you’re so inclined) at on their Bandcamp page. Furthermore, the band released a self titled EP last night, with their performance being an unofficial EP release show. That EP can be found on Soundcloud. A word of advice from us at No Country: keep up with this band. Gunther Doug have been one of our most exciting finds recently and there’s no doubt the band will make something of themselves.

Soon after Gunther Doug finished their spectacular set, fellow Nashville natives Sol Cat captivated that tiny upstairs room with their unique blend of psychedelic alternative groove rock. Honestly, if you’re an active member of the music scene here in Nashville and you haven’t given Sol Cat a listen yet, you’re really missing out. The band is catchy, to say the least, and have built up quite a reputation for themselves here. Truthfully, the reason Sol Cat has gained as much traction as they have is because they manage to write challenging, eclectic music that is simultaneously over the top danceable.

Currently, Sol Cat’s discography is limited to a single eponymous full length, which interestingly enough is available in two different colors of vinyl. Of course, the album is available as MP3’s via their Bandcamp. Later this month, Sol Cat will be embarking on a short tour, which will take them all the way from a free show at CMJ in New York all the way down to the bayous of New Orleans. Unfortunately, the band has not announced any upcoming shows in Nashville, but we’ll be certain to let you know when they do.

Finally, the surprise headliner took the stage. Though many people around town were convinced this would be the Kingston Springs or one of several other local bands, it ended up being synth pop act Machines Are People Too. The group’s ethereal tones, moving vocals, and intriguing harmonic layers pretty much force any listeners to start moving their feet; by the time the local rockers started their breakout single “Freaks” the wooden floor was violently shaking and creaking under the weight of everyone dancing. However, concerns about the room’s structural integrity were quickly cast out as Machines Are People Too’s music saturated the ears and brains of all in attendance.

Machines Are People Too have two EPs out, one of which was released this past July. Both of the EPs can be found on iTunes or through their Bandcamp (insider’s tip: their first EP is free on Bandcamp but not in iTunes). Due to the fact that they were a surprise headliner, chances are many Machines Are People Too fans did not get a chance to come out and see them last night. Luckily, they’ll be playing at Exit/In on September 19th with The Lower Caves, Not in the Face, and The Reneaus. That show is only $3, so there’s no excuse to not come out. That being said, in order to get a ticket for this show you must RSVP via this website. Don’t say we never did anything nice for you.