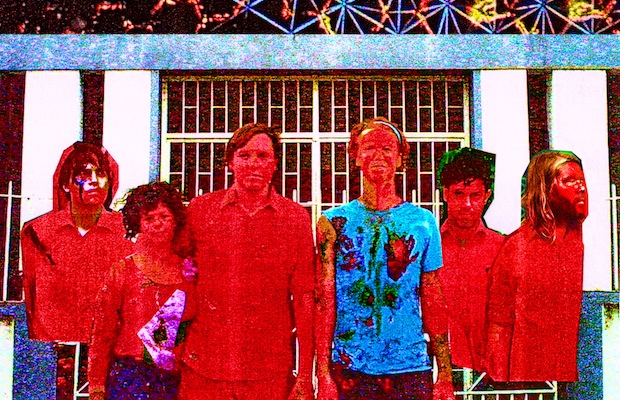 Emotive Canadian indie rockers, the Arcade Fire will release some new music today under the moniker The Reflektors. Pitchfork broke the news this morning (including a photo from our very own Grimeys Twitter account), announcing the release of a 12-inch vinyl of original Arcade Fire material. It is likely that this 12-inch will contain a couple of tracks from the long-awaited upcoming followup to the Grammy-winning 2010 album, The Suburbs, which is being produced and recorded with James Murphy (of LCD Soundsystem). By all accounts, the 12-inch vinyl will contain the tracklisting for the upcoming album, but will only feature the presumed title track “Reflektor”. According to initial reports, the single will also contain some backing vocals from David Bowie. Talk about a cryptically awesome introduction to some new music from Arcade Fire. [updated: the very danceable Bowie-Meets-LCD Soundsystem-esque single and video are below]

Grimey’s is hosting a listening party tonight, and they are selling a VERY limited number of the 12-inch vinyl, set to go on sale at 9pm. Check out the details for that, and have a listen to a teaser video about the new record below.

Details from Grimey’s about the listening party:

We will be open regular hours, until 8pm, then we’ll close both stores only to re-open Grimey’s Too for the #ReflektorParty! Please line up at the front door of Grimey’s Too for your chance to purchase the “Reflektor” 12″. We have 30 copies to sell so the first 30 people in line will get them. We also have a similar number of Arcade Fire buttons and around 20 stickers. So the closer you are to the front of the line, the better your shot at getting a 12″, sticker and button. We will be giving away one prize pack of a limited edition Arcade Fire Reflektor t-shirt plus sticker, button and the promo CD we will be playing at the party (so we don’t have to open up a 12″). The Reflektor 12″ is limited so they are only one per customer.

Here’s a trailer for Reflektor:

Here’s the video and single of “Reflektor”:

And a tweet from Grimey’s, with cover art for the 12-inch:

Who knows what this is? You’ll be able to buy it @Grimeys on Mon. 9-9 at 9pm! @recordstoreday @arcadefire pic.twitter.com/fTHZv0i5DJ

In other Arcade Fire news, the band just released an interactive video for “Reflektor,” which can be viewed here, and were announced to perform on the season premiere of Saturday Night Live, with host Tina Fey, on Sept. 28.