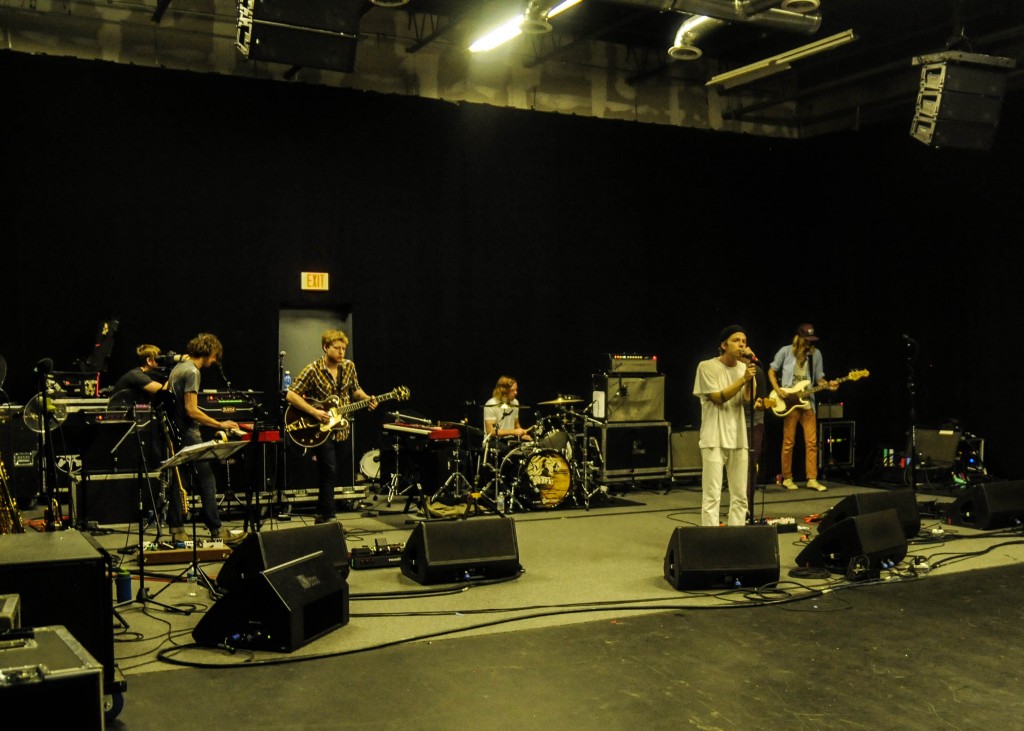 Bowling Green, Kentucky natives and partial Nashville residents Cage The Elephant invited No Country to check out the rehearsal of their October 8th, RCA Records release, Melophobia.  We brought you the first track, “Come A Little Closer,” after it debuted on Rolling Stone earlier this month, and it put us in the mood for some new sounds from the alt-rockers.  We were fans of the first two releases, but after spending some time with the new single (and some time with CTE guitarist Brad Shultz), we had a feeling that Melophobia was going to bring a more mature sound from the already successful band.

The full rehearsal clocked in just a few minutes over the 39 minute recording time, and the sparse setting over at Soundcheck Nashville was filled with what appeared to be largely family, friends, and a few lucky winners from local contests.  With this intimate setting, we were unsure how the usually highly entertaining and frenetic live performers were going to handle the more subdued and seated crowd.  The answer: they played that effing rehearsal like they were on the stage at Bridgestone (where they are going to be opening for Muse on September 6).

Tearing through track after track, frontman Matt Shultz brought out all of the stage antics (jumping on road cases, swinging microphones, and kicking over mic stands) that we would expect. However, the highlight of the performance for us was definitely the maturity of the Shultz’s vocals.  We’ve seen CTE on several occasions before, but this new record truly highlights his vocal range and ability.  It’s less of the bar room, speechy singing style, and much more of a true star that is owning the stage with more than just his ability to entertain (see a twerking example of the opposite here).  Throw in the stellar work of the band, including two songs with a three horn accompaniment, and this new record is going to be something different that we think you guys are really going to enjoy.

The track listing for Melophobia was slightly different than the live set.  See both below, and you can see more photos by Brad Hochstetler after the jump.  If you haven’t already bought your tickets for the show at Bridgestone on September 6th, you are really risking missing out.  Not only will it be your first chance to hear some of these new songs, but proggy British rockers Muse will blow your mind too.