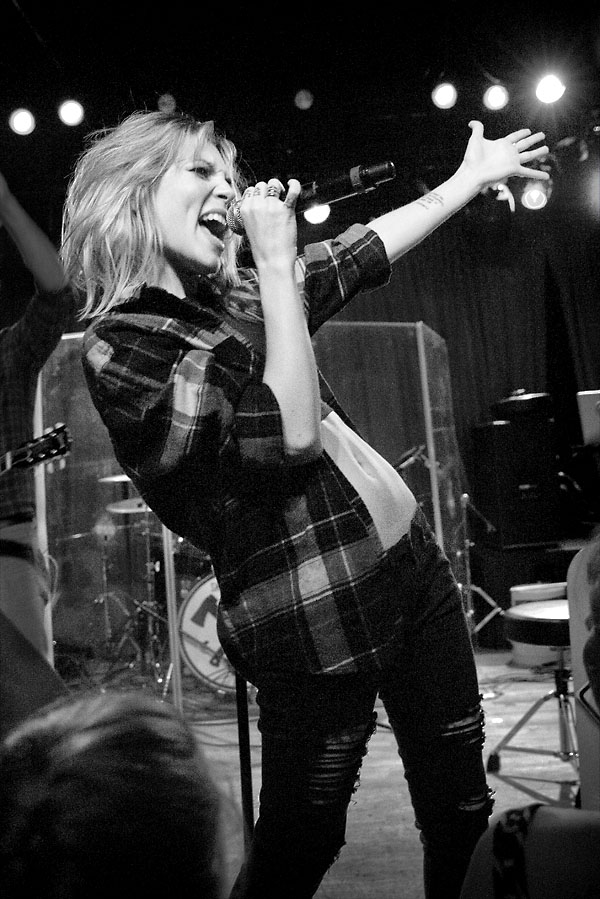 Skylar Grey and her band brought the heat to Mercy Lounge on Monday night, accompanied by TeamMate & songwriter Conner Youngblood. Unfortunately we weren’t able to catch Conner’s set, but made it in time for TeamMate & Skylar’s sets.

TeamMate is a musical duo who were romantically involved for a decade before Dani (drums) came out to her then-boyfriend, Scott (synth/keys). A majority of the  band’s songs revolve around the resulting emotional turmoil, and Scott’s subsequent move to Los Angeles. The two have worked through their personal differences (if that’s not some kind of love, I don’t know what is), and managed to create an impressively full sound throughout their set, combining poppy hooks, personal lyrics, and tight harmonies.

Skylar Grey took command of the show from the moment she set foot onstage, with piano-led track “Back From the Dead.” Some fans (many with under 21 x’s on their hands) sang along with every word to her set, even though her album only dropped a few weeks ago. It’s no wonder that Skylar cites influences like female songwriting greats Fiona Apple and Alanis Morissette, as she channeled some serious “You Oughta Know”-style rage with “Pulse,” and Fiona Apple-esque melancholy on the contemplative piano track “White Suburban.” She wasn’t afraid to get silly with “Let Me Ride,” as she lead the swaying crowd to the crunchy, dirty song, co-written with Eminem, and even played acoustic guitar during a few of the more upbeat tracks like “Sunshine.” Her new album, Don’t Look Down, is sure to be one of this reviewer’s picks of the year (even the bonus tracks are stellar!). I predict we’ve just seen a glimpse of what this girl can do.

Check out some of the great shots of TeamMate & Skylar Grey from our photo contributor Shawn Jackson!