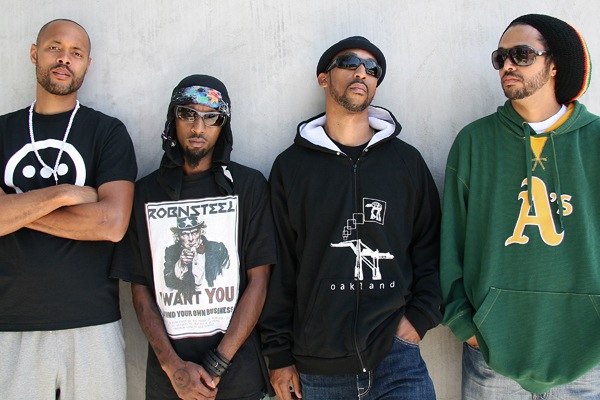 Hip Hop pioneers Souls of Mischief, part of the Hieroglyphics collective (which also includes Del the Funky Homosapien, among others), are celebrating the 20th anniversary of their seminal debut album, 93 ’til Infinity, by performing the record in its entirety on tour, backed by a full seven-piece band. The tour is hitting our very own Exit/In this Monday, July 15, and we’re excited to announce a very special weekend ticket giveaway contest for you (don’t forget, we’re also giving away some tickets to another great hip hop show, Killer Mike + El-P, on Tuesday!).

If you’re a hip hop fan and you don’t know 93 ’til Infinity, shame on you. Not only is it Souls’ most critically and commercially successful release, but largely considered one of the greatest hip hop albums of all time, and one of the most important releases of the early ’90s. You can stream it here, while you get excited for the show. After the jump, we’ve got details on how you can score some tickets, along with more about Souls of Mischief and opening act Amerigo Gazaway.

They’ve continued to release fantastic albums off and on for years, most recently Montezuma’s Revenge in 2009, but never have Souls of Mischief quite recreated the complete magic of their debut. 93 ’til Infinity was, and still remains, one of the greatest hip hop albums of all time, and has had tremendous influences on countless artists in the two decades since its release. Seeing the group perform this landmark record in full, especially in such an intimate setting, is a once in a lifetime event, and a show that you absolutely cannot miss.

Nashville-based rapper, turntablist, and producer Amerigo Gazaway is perhaps best known for his associations with DJ collective Gummy Soul. His old school hip hop sensibilities mesh perfectly with Souls, and his breakout album, Fela Soul, is an incredible callback to the real art and soul of true hip hop. Additionally  his willingness to experiment and push the boundaries of his craft make him one of the freshest artists in the game.

Three lucky winners will each score a pair of tickets to the show. You’ve got two ways to win:

Souls of Mischief and Amerigo Gazaway will perform at Exit/In on Monday, July 16. The show starts at 9PM, is 18+, and tickets are available here for $15 in advance and $18 day of show.