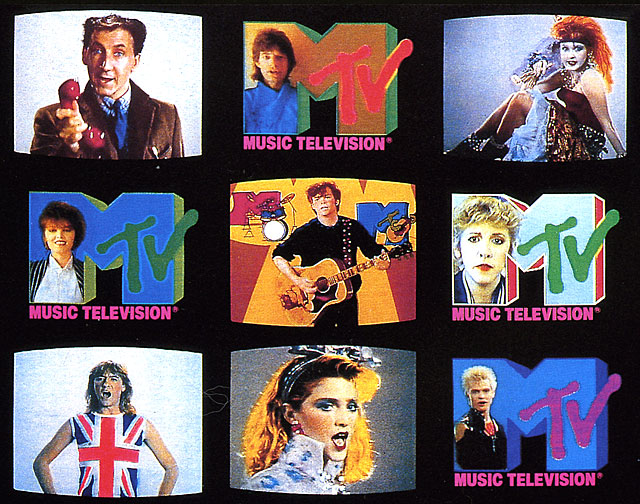 Alternate Post Title: “I spent 12 hours* watching MTV (in case you didn’t)” *This is a lie. Ok, an exaggeration. It was more like 6 hours, but it could have been 12, because MTV actually played half a day’s worth of music videos from throughout the channel’s near 32 year history (feel old yet?). Since last week’s 4th of July celebrations were a little bit of a bust due to the downpour, (though you gotta’ love the determination of our town going around scooping up other cities’ canceled fireworks stock just to supersize our own) it made sense to turn on the set and see what was happening in TV Land.

And there she was, Best Coast’s Bethany Cosentino, (more on Best Coast here) as a modern day Daisy Fuentes telling viewers to stay tuned for the video up next and hang with them all day because MTV would be celebrating independence with a marathon of music videos. Wait. What? MTV? The channel that actually dropped “Music Television” from its logo? The station that exists now only to flash hash tags that drive you to Twitter and hawk Proactiv? No way. I’ve seen this video below, I’ve felt appropriately aged and shamed. I know not to expect the resurrection of music videos as a viable promotional tool for bands in today’s industry climate.

But still, I watched. I watched gleefully. I sat in my pajamas just like when I used to skip junior high (sorry, Mom) and watched and watched and watched MTV. I delayed leaving the house because GUYS THEY’RE PLAYING “MMMBOP!” and Madonna and Busta Rhymes and Cake and Kid Rock and Aerosmith and Montell Jordan. Sure, there were Beiber videos and Katy Perry and what the hell, how is dubstep still a thing? But there was also Phosphorescent‘s heartbreaking “Song For Zula” (maybe the absolutely most scathing break-up songs of all time, certainly one of the most lyrically stunning). (More on Phosphorescent here and here).

And, while there was that silly but well-intentioned Macklemore, there was also that adorable Mary Lambert singing live with him and how can you not be charmed by her?

And apparently, the whole day was set up to feature more emerging artists and drive traffic to their profiles via MTV’s Artist Platforms which allow visitors to buy music and leave monetary “tips” through the virtual tip jar. Plus, Viacom and Monster DNA Headphones were matching those paid to unsigned artists during the program dollar for dollar, up to $100,000. Pretty sweet deal.

Sure, the “party” they were broadcasting from all Independence Day was a far cry from the Beach House days of yore: a small assembly of apathetic hipsters draped over some patio furniture somewhere in Brooklyn. But, for just a moment, it felt like it used to feel, MTV was here to help you find music you’d love and to catapult innovative music into the mainstream… and not just for reruns of 16 and Pregnant. I looked around for Leap Day William, it was glorious.

So, if you please, divert yourself today by reveling in this revival of the greatest time ever for music on TV with this surreal clip of Radiohead at the MTV Beach House. (Quality’s not outstanding, but bonus points for Thom Yorke in the sunlight, no?)