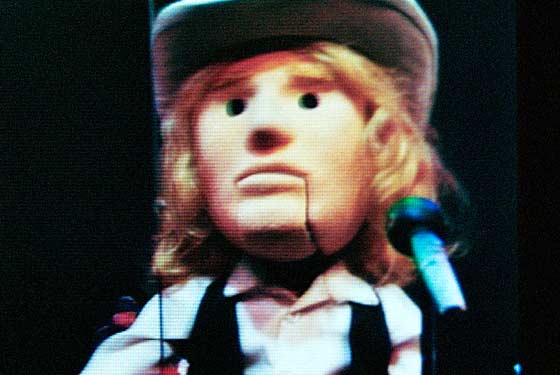 What up, friends? Here we are again in the middle of the work week and we got something to help ya break on through to the other side from the man who has sorta’ become the patron saint of No Country as of late (or at least the de facto spiritual star of our birthday soiree).

Mr. Beck Hansen (that’s Bek David Campbell to his momma), first came onto the scene in what is apparently the favorite decade of the Diversions series, the 90s. I first recall catching a glimpse of the scrawny and scraggly little alt-rocking-sometimes-rapping weirdo in between Matt Pinfield moments on 120 Minutes on MTV. In high school, my best friend had the biggest crush on him and her notebook stood testament to her affection, covered with pictures she had clipped from SPIN or Rolling Stone. I admit, I didn’t quite get the appeal at first, though I certainly enjoyed the creativity, humor, and dance-ability of his early radio hits. I may have been a late convert, but Sea Change changed me.

Then, in 2006, I got to experience Beck in one of my favorite places on earth, Bonnaroo. And I became a lifelong fan, for sure. For those of you that missed out on the awesome puppet preamble… you can enjoy it below!

We had so much fun celebrating our second anniversary with a slew of some of Nashville’s most talented taking their take on Beck’s Song Reader and soon we’ll be releasing some videos from that special night with our friends! We were so inspired by Milktooth‘s cover featuring Alanna Quinn-Broadus that we just had to see what else Nashville could do!

And wouldn’t ya know it? Beck’s at it again — after sharing his songs for the world to sing, he will record his own material again with both an acoustic record (likened to One Foot In The Grave) and a much anticipated follow-up to 2008’s Modern Guilt (both to be released independently).

And that’s not all! He’s also release a new electronica-sorta-single, “Defriended,” that will not appear on either record, but will live as a stand-alone single. You can give that a preview right here:

There are also rumors of another stand alone single later this summer – so you’ll wanna watch out for that. Plus Beck will be performing Song Reader in its entirety in London on the 4th of July – so who’s going all expat with me?

And because it’s Hump Day, and we’re all about taking you down the happy little rabbit hole of diversions, check out this flashback of Sonic Youth’s Thurston Moore interviewing our loveable incorrigible loser waaaay back in 1994.

Get crazy with the Cheeze Whiz!