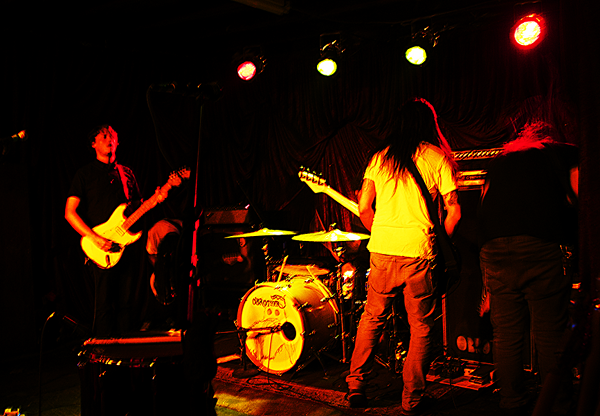 Fresh off a run of dates opening for Alice in Chains, Atlanta’s O’Brother kicked off their string of headlining shows last week with a stop at The End in Nashville. Joined by HRVRD and Daylight, two groups O’Brother have shared the stage with previously, but never at the same time, the show sported a surprisingly strong and diverse bill and one of the best nights of music I’ve had the personal pleasure of witnessing at The End. The trio, three vastly different bands, bear some unorthodox commonalities which, when brought together, fit in a shockingly seamless way.

Though the place wasn’t packed (and it’s a shame, because a show this good should be pulling a crowd in a room twice the size), the audience more than made up for it in entusiasm. By O’Brother’s own admission, they’ve played very few headlining tours, most often opting to open for larger bands, and were just happy to see a crowd at all. This was my first time catching all three acts, and I left impressed and wanting more. A metric I use for the test of a great show, is how often I find myself spinning the band’s music immediately after- and I’ve been rocking to all three groups nearly every day since.

The first band to take the stage was Daylight. Everything about the group waxes ’90s nostalgia. The long, unkempt hair, which spent a good portion of the set obscuring their faces. The aloof, Gen X-y, laid back “who cares” attitude. Co-frontman Taylor Madison’s Friends t-shirt. And even the cover art of their latest album, Jar, which possesses a clear alt-rock, post-grunge influence.

They’re not purely a retro (if you can even call the ’90s retro) or nostalgia act, however, as their live show owes just as much to Nirvana as it does to their friends and former tourmates (the now defunct) Basement. It’s also apparent that their sound and stage show comes from a place of sincerity; it’s not a gimmick, it’s just Daylight. There’s a reason the band was able to assimilate into the punk and hardcore scene early on: Daylight doesn’t pigeonhole themselves into a genre. With songs that are straightforward, powerful, and downright strong, the group manages to confidently sit on the cusp of multiple scenes, able to be embraced by all. 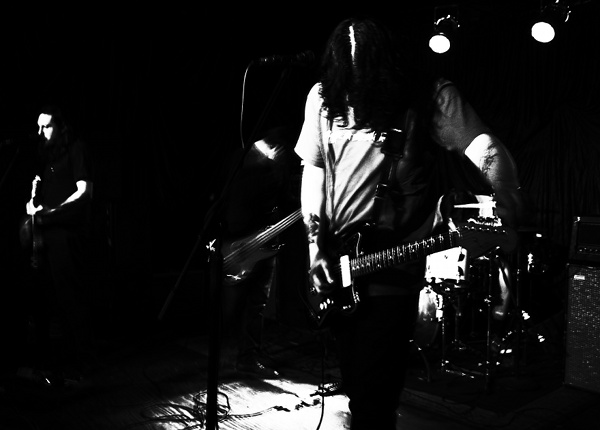 They may only have one proper full-length under their belt, but Daylight are already a seasoned touring act, relentlessly honing their live show by traversing the globe over the past several years. While the Pennsylvania rockers possess a subdued stage presence and nonchalant attitude, their delivery is anything but. When performed live, the band’s songs breathed to life an energy and electricity that transformed them into a performance powerhouse. Tracks like current single “Life in a Jar” came across impossibly heavy, yet thick and melodic. The band performed with a calculated precision and effortless delivery, justifying the recent wave of hype that surrounds them.

Madison and fellow frontman Jake Clarke spent most of the evening trading vocal duties, but on the few moments the pair performed in unison, notably on their final song, the singers assaulted the crowd with unwavering wall of sound and energy. At one point, Madison asked if anyone was actually there to see them and, upon a silent response, responded “that’s what I thought.” Unfazed, the group used the evening as opportunity to prove themselves to a mostly new crowd, and, almost certainly, won every single one of them over.

Daylight set the tone in energy and expertise that many bands would struggle to follow, but Charlotte, NC’s HRVRD proved up to the task. Recently signed to Equal Vision, the band are touring in support of their brilliant new album, From the Bird’s Cage. In contrast to Daylight, HRVRD’s sound is a thoroughly modern one. Where the former stuck to traditional instrumentation, the latter employed synthesizers  melodicas, and brass. Where Daylight was nonchalant in attitude and heavy in sound, HRVRD was enthusiastic and vehemently passionate in stage presence, and melodic and atmospheric in sound. The two groups did bear one thing in common, however: a strong, polished performance style and a professional poise.

On their new album, HRVRD settles into an even more ambient, orchestrated, and poppy sound- chock full of hooks and unorthodox instrumentation. Letting their songs find footing through emotional themes, rather than composition for composition’s sake, the band brings a refreshing and, often, unpredictable and unique style to the table. Their live show is a perfect extension, and further enhancement, of HRVRD’s particular penchant for artistry. 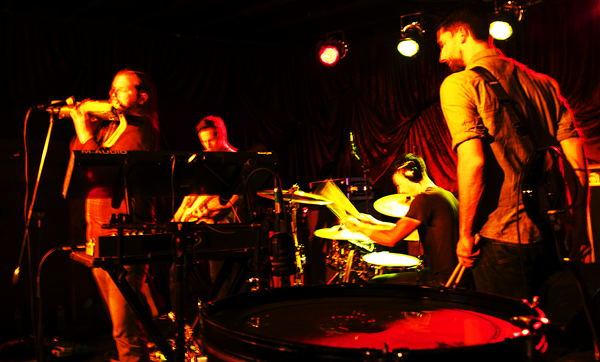 One of the most distinctive things I noticed about HRVRD, aside from the cornucopia of instruments on stage, was the group’s passion for delivery. At times, vocalist Jesse Clasen visibly shook as the lyrics escaped his mouth, emotionally embodying his songs and clinging onto and hammering home every syllable. HRVRD are a band of strong players, but never flaunt their technical prowess, bouncing from minimalist and sparse to groove-driven, ambient, and layered. The band stacked their set to work and build like a roller coaster of energy, each song gaining slightly more momentum as they worked towards a resolution. At their apex, they sounded not unlike The Mars Volta- epic, otherworldly, and endlessly confident.

HRVRD are a hard band to pin down by design. At times, their set leaned heavy on the funk and experimental side of the spectrum, then just as soon transformed to indie rock, western-tinged, or alternative. The quintet was perhaps the most out of place on this bill, but it didn’t matter in the slightest. HRVRD are an unreasonably fun, high-energy, and unpredictable act, and one sure to entertain fans of all genres. And the HRVRD fans were certainly a strong presence in the crowd, as evidenced by the rabid sing-alongs and enthusiasm threatening to burst out of the small show space.

To call the crowd warmed up by the time O’Brother took the stage would be an understatement. Despite a long night of rock, energy and excitement still ran high, and the Atlanta group pulled out all of the stops from their very first note. It’s clear that in O’Brother’s time on the road with larger, older acts, they’ve picked up a few tricks. The band blasted into their set, at once heavy and hypnotic, with a steady confidence that allowed them to command the room like an arena.

O’Brother are the logical bridge between Daylight in HRVRD. They share the ’90s vibe and a long-haired, headbanger style of the former, but merge it with more contemporary sensibilities. They share a penchant for texture and complex instrumentation, and a high-energy stage presence with the latter, though skew considerably heavier. In fact, O’Brother are easily the most eclectic of the three bands. Some of their tracks really ripped, straying into intensely heavy territory before settling into an agressive alt-rock, Deftones-esque vibe. Others left more room for melody, showcasing vocalist Tanner Merritt’s impressive pipes. 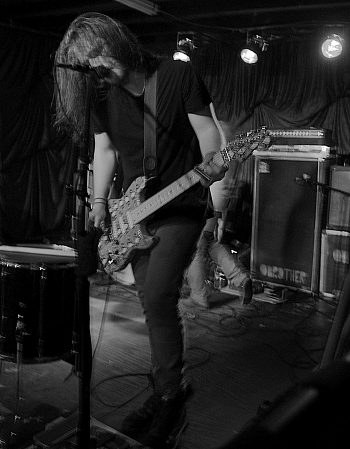 Even at their heaviest and most chaotic, O’Brother’s every transition was seamless and polished. The thickest, noisiest bits of every song were meticulously calculated- engineered to land and connect with the crowd in the most effective way. This is a band of not only impressive players, but also impressive performers, and they were simply captivating to watch. Any band can be loud, but to truly be heavy takes skill, and O’Brother have mastered it. They’re often labeled “experimental rock,” and that’s a fair assessment. However, the group largely defies labels or genre-conventions, because they’re strong enough writers to weave between them without losing the unifying core that shapes their sound.

The crowd clearly showed up for the headliners. Each fan favorite prompted a round of cheers, and the audience passionately sang along throughout the set. As if they knew how much energy their openers would expel, O’Brother front-stacked the set with the heavier material, and transitioned into their more ambient, experimental, and sparsely orchestrated songs throughout- thoroughly hypnotizing me with each passing track. By the time the band played a new song, from a record set for release later this year and expected to be announced very soon, I was feeling the effects of a long night of great music, but so thoroughly engaged in O’Brother’s set that I didn’t care. Despite pleading from fans for an encore, the band explained that they literally had played every song that was performance ready- a further testament to their professionalism. They ended with an epic singalong, and couldn’t have found a higher note to go out on. 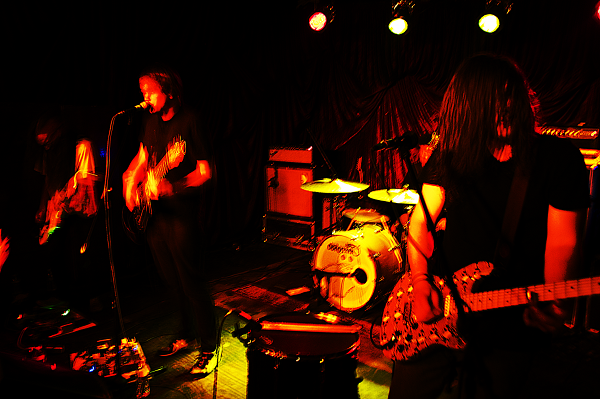 O’Brother called the show “the coolest bill we’ve played in awhile,” without a hint of insincerity. Every band of the night held their own, representing the best their respective genres have to offer in the up and coming scene. To catch any one of these acts would have been a treat. To catch all three was simply magical.