In the flood of emails that come through our digital gates, it’s often hard to find something (sometimes, anything) that truly sounds fresh and new.  I mean, it’s hard enough just to listen to a lot of the stuff that we get, so, when we get our hands on something so atypical of any Nashville sound, it is inspiring and exciting.  This is how I felt when I heard the new single from Nashville transplants Brotherun. 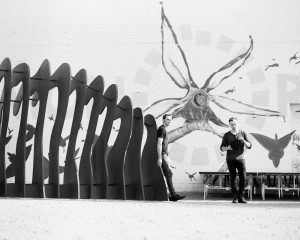 The electro pop duo consists of Nick and Trevor Tillery (the latter previously of SPELLS).  Originally from Arizona, the two brothers have created a type of music that we think definitely stands out in the already vibrant Nashville music scene.  I know this is may be defined as “electro pop”, but I just keep hearing the Radiohead (or Atoms For Peace) influence in the beautiful dreamy soundscapes.

This is the first time the Tillery brothers have ever collaborated musically, and, despite growing up in the same household, this project gained life by emailing song ideas back and forth.  After a few months of correspondence, they had a pile of songs and a newly discovered musical chemistry.  Their self titled debut EP will release later this spring, but you can check out the first single “Wishful Thinking” below.

We know that a few lucky folks got to check out a debut live set back at The End in December, and we understand more shows will be announced soon.  We’ll make sure to let you know when that happens, and you can track the band on your own through their twitter and Facebook feeds.  In the meantime, enjoy Brotherun!